USPS whistleblower Richard Hopkins demanded Tuesday night that The Washington Post retract a story suggesting he ‘recanted’ his claims regarding directions he was given by his Erie, PA postmaster to backdate ballots mailed after Election Day–the story was a lie, he did not recant.

Hopkin has faced all kinds of pressure to change his story but hasn’t. He’s since been placed on non-pay status by the Erie Post Office.

The House Oversight Committee, controlled by the Democrats, claimed they were told by the USPS Office of Inspector General that Richard Hopkins had signed a sworn affidavit recanting the sworn affidavit claiming he was forced to change ballots.

#USPS IG investigators informed Committee staff today that they interviewed Hopkins on Friday, but that Hopkins RECANTED HIS ALLEGATIONS yesterday and did not explain why he signed a false affidavit.

After the fake recantation story went viral, Project Veritas released another video interview. In the video, Richard Hopkins not only said he didn’t recant his story but played an audiotape of SPS investigators Russell Strasser and Charles Klein bullying the whistleblower to get him to recant his statement on the backdating ballots scheme. He was even placed on unpaid leave.

Richard Hopkins, a Combat Veteran and a marine with a daughter never asked to go public or for any of this. In the full interview released tomorrow, he said this harder than what he endured in Afghanistan.

ELECTION FRAUD UPDATE: @USPS worker Richard Hopkins in Erie, PA has been placed on UNPAID LEAVE for blowing the whistle on backdating of ballots.

Project Veritas has confirmed Federal inspectors from the Office of Inspector General are investigating multiple post offices in PA.

Below is the letter he received from the USPS. 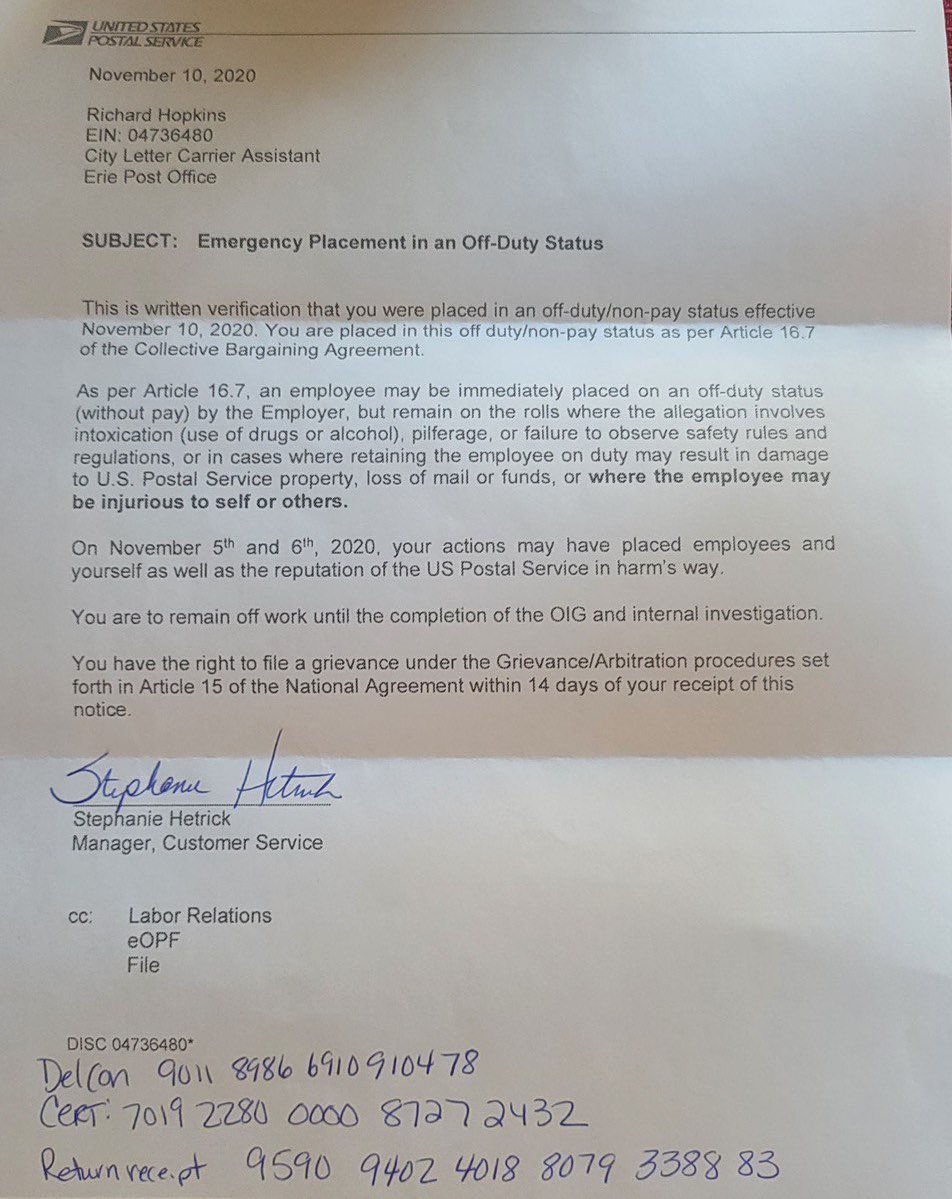 I suppose this means the whistleblower law only applies when one is outing supposed GOP lawbreaking.

The Washington Post reporter @Jacobbogage got leaked to by federal agent Russell Strasser in who admitted in a recording done by Richard, that the federal agents were coercing and scaring the whistleblower to water down his statements.

But Richard never recanted, has denied it. pic.twitter.com/35WyPmgI5O

The Veritas videos below are a small part of the audio evidence Mr. Hopkins provided, revealing the USPS investigators trying to get him to recant his story. But first however, is a video of Hopkins saying he did not recant.

USPS Whistleblower Richard Hopkins: “I DID NOT RECANT”@shawnboburg and @jacobbogage have been played by the same federal agents on the audio ‘coercing,’ ‘scaring’ the whistleblower to water down allegations. As reporters, they are REQUIRED to include Richard’s denial. REQUIRED pic.twitter.com/8Rj5yWSljz

“My name is Richard Hopkins, I’m a postal employee who came out and whistleblew on the Erie, Pennsylvania postal service, postal office. I am right at this very moment looking at an article written by the Washington Post—it says that I fabricated the allegations of ballot tampering. I’m here to say that I did not recant my statements, that didn’t happen, that is not what happened. You will find out tomorrow, and I would like that the Washington Post recant their wonderful little article that they decided to throw out there, out at random.”

And here’s audio of the investigators’ attempting to force the whistleblower to recant:

Agent Strasser: “I am trying to twist you a little bit”

“I am scaring you here”…” we have Senators involved…DOJ involved…reason they called me is to try to harness.” pic.twitter.com/tK2JPu6Wqm

Making matters worse, a go fund me page set up for Richard Hopkins to tide him over during his salary loss was abruptly closed. Hell hath no fury as the postal service scorned?

The fundraising campaign to help Mr. Hopkins support his family during this USPS punishment was restarted at a different site:

You can support Richard here: https://t.co/SH14Zi6dOl

Below is the entire abusive interrogation of Richard Hopkins by USPS interrogators.

BREAKING: Here is RAW AND UNEDITED Audio of The More Than 2 Hour Coercive Interrogation of Military Veteran and @USPS #BackDateGate Whistleblower Richard Hopkins by Federal Agents He Believed Were There To Help Himhttps://t.co/IJ5JDkIyUc#ProtectRichard