On Friday, CBS Philly reporter Justin Finch reported on a motive in an ambush-style attempted execution of a Philadelphia police officer.

Finch, citing police sources, said the shooter confessed, telling authorities he did it in the name of Islam.

Police sources: suspect has given a full confession, says he did it in name of Islam , Officer Hartnett is out of surgery, and stable

“According to him, police bend laws that are contrary to the teachings of the Quran,” said Police Commissioner Richard Ross.

Sources say the suspect’s full confession of the alleged attack was written down and recorded on video.

“When you look at the video, this is one of the scariest things I’ve ever seen,” Commissioner Ross said. “This guy tried to execute the police officer. The police officer had no idea he was coming. It’s amazing he’s alive.”

The officer survived, despite being shot multiple times at point-blank range.  He even returned fire and struck the suspect at least three times.

We are grateful for the outpouring of support for our brave officer,Jesse Hartnett.Please keep him in your thoughts & prayers as he recovers

At least one person said the shooting proves Trump is right.  There’s a couple questions that have to be asked, however.

Does Michael Moore stand with this guy as well?  And doesn’t this fly in the face of Hillary Clinton’s claim that Muslims don’t ever shoot people? 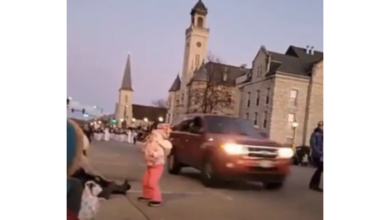