Sen. Sherrod Brown, D-Ohio, is now scolding Congress for ‘not doing its job’ in ‘redistributing wealth in a fair way’. He’s obviously mistaken America for someplace else.

Surely he must be describing some Soviet-Era state with assigned housing and breadlines… not a nation forged in the Spirit of ’76. Right?

You’d like to think so, but you’d be wrong.

The Democrats’ “Long March” toward Socialism (or worse!) is picking up the pace. They aren’t even trying to hide it anymore. Their buddies in Hollywood are citing Marx at award shows (‘Workers Of The World Unite’) while Senators scold Congress for failing to do their bit in wealth redistribution.

Sorry, but that is explicitly NOT the job of elected officials. And anyone who thinks it IS should get the Hell out of Dodge and work in the Private Sector someplace he won’t do so much damage. Maybe buffing the floors in a museum during the night shift or something.

Sen. Sherrod Brown (D., Ohio) on Wednesday said Congress is not doing its job of redistributing income in a fair way.

“We know Congress isn’t doing its job to redistribute income in any way that’s fair to hundreds of millions of Americans, we know that,” Brown said during a hearing at the Senate Banking Committee.

“Senator McConnell and the president have refused to raise the minimum wage, it’s been stuck for 11 years at under eight dollars,” Brown said. “They took away overtime for about 2 or 3 million Americans because of truncating the overtime rule, tax cuts for the rich, and now tax cuts for Medicare.” — Free Beacon

Is it any wonder we don’t trust these people?

There is zero Constitutional mandate for the sorts of things they hope to accomplish through legislative powers, and yet, they still press on, undeterred.

But anyone who stands opposed to their agenda is ‘tyrannical’ and ‘authoritarian’.

How very convenient for them.

Cries for Socialism from the clamoring mob are growing louder. But we’ve got a President who’s holding his ground. Trump may not be leading the Battle of The Bulge like Old Blood And Guts, but he’s leading a domestic scrap against growing cries for Socialism and ‘free S#!T’ from the taxpayer pocket.

Trump may not have made his mark with rousing speeches about going off to battle, but he has his own rousing speeches. Ones about Freedom here on the home front. One with quotes like:

“America was founded on liberty and independence – not government coercion, domination, and control. We are born free, and we will stay free.” And..

“Tonight, we renew our resolve that America will never be a socialist country,”

Surrounded by cackling voices demanding we Turn America into a socialist scrap-heap, it takes a real fighter to hold his ground and push back. To borrow a phrase from WWII:

“They have him surrounded… the poor bastards.”

This fighting spirit has been captured in another of our own Doug Giles’ series of Art pieces capturing Trump’s fighting spirit in iconic moments in film and Americana. This time, Doug has put him in Patton’s shoes, and his very own MAGA helmet. This one is titled, simply: This is war.

For those who want one for themselves, as a gift, or even just to tweak their Trump-Deranged friends and relations, prints are — as always — available from his website. 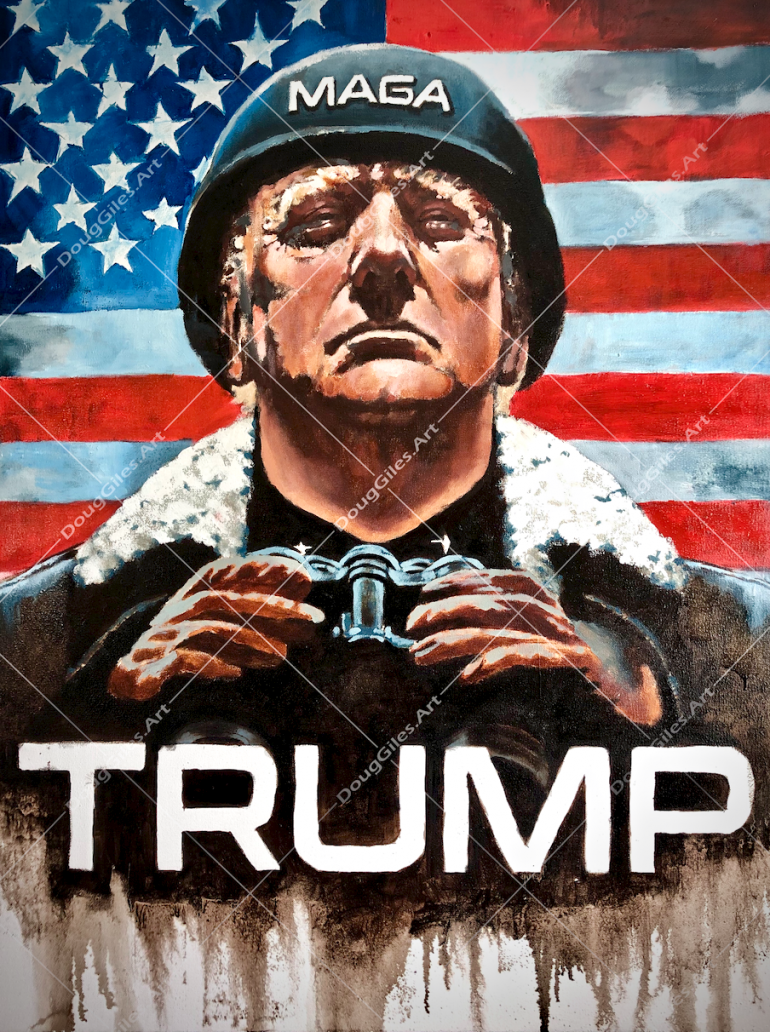 If they think Patriots will roll over and die while a few socialists try to drive the country into a socialist ditch, they’ve got another thing coming.