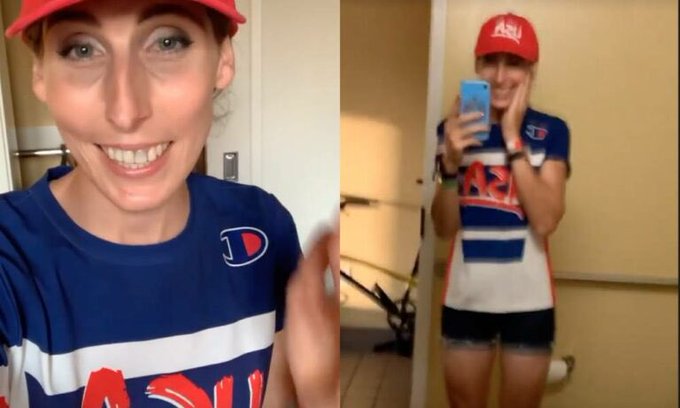 WHAT is really surprising is that well-meaning, live and let live folks are shocked ! shocked ! by a burning anti-American hatred that afflicts countless within the radical left trans community. For heaven’s sake, it is as if those who are afflicted with a mental health disorder, gender dysphoria, are expected to be rational thinkers!

MORE specifically, the trans community exhibits a visceral hatred towards America’s traditional underpinnings that are based upon Judeo-Christian values — of which the flag is its most visible symbol. Sheesh. Perversely, it makes sense that the radical left in general and those who identify as trans in particular despise “Old Glory!”

BUT what would be beyond the pale is the following: if this he-she, whatever, wins and dares to burn the American flag — and is still allowed to keep a national medal — well, hell should have no fury like a nation scorned!

ALAS, just in case the powers that be dig in their so-called  ‘inclusive/diversity’ heels and refuse to honor the national symbol, it doesn’t obligate millions of patriots to go along.

AS such, this is the address to direct your rightful rage: Executive Committee of TEAM USA. Nothing less will suffice.

ALL of which brings us straight (no pun intended) back to “Chelsea” Wolfe and ‘her’ vile threat…. Chelsea Wolfe, a trans female BMX rider who qualified to represent the US as an alternate at the US Summer Olympics, wrote on Facebook that she wanted to burn the US flag on the podium in protest of trans rights. BMX Freestyle rider Chelsea Wolfe, who qualified as an alternate to represent the U.S. at this year’s summer Olympics in Tokyo, said last year that her goal was to win an Olympic medal “so I can burn a US flag on the podium.”

“My goal is to win the Olympics so I can burn a US flag on the podium. This is what they focus on during a pandemic. Hurting trans children,” Wolfe wrote on Facebook on March 25, 2020, along with a link to a PinkNews story about the Trump administration’s stance on transgender girls in female athletics.