As the saying goes, ‘Sometimes a picture is worth a thousand words’ and in the case of Barack HUSSEIN Obama…America’s most narcissistic of presidents…there are many pictures to speak many words…and those words are all so NOT good.

But first a little history and presidential protocol. Simply, America does not recognize royalty or social rank, and when our president interacts with foreign leaders he is representing our country, ‘We the People’, and our Constitution.

This means that when Barack HUSSEIN Obama in his capacity as president bows to a foreign leader…does the so-called ‘bro-handshake’ with a Communist dictator…hugs a Communist leader…he is representing us and thus we are doing these things right along with him.

And that should have every one of you hopping mad for America bows to NO one. 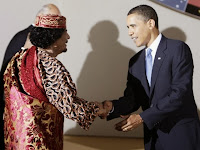 Bowing, hugging, and ’bro-handshakes’ of any kind done…and all done with a big smile on his face…before or with foreign leaders who are NOT America’s friends…done before or with communist dictators…shows a lack of respect to America and an internal weakness of the American people in allowing this president to continue to do this.

The simple fact is right now America NO longer leads…sadly our number one super power status has been overtaken by Vladimir Putin’s Russia (and by a man who bows to NO one)…for with Barack HUSSEIN Obama at America’s helm catering and bowing to the enemy has become the norm. Obama believes that all nations should be equal…all leaders on the same plane of power…all answering to his supported and oh so-wanted ‘One World Government’ order. 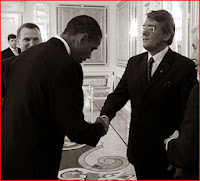 But I pray that is NOT America’s destiny for that was NOT the goal when America was founded, and last time I looked the Constitution was still the law of this land.

We Americans…especially we American patriots…know what we must do to protect both our Constitution and our way of life as laid down in that very Constitution…and we know we cannot allow Barack HUSSEIN Obama to defame, dishonor, and negate our Constitution any longer as he caters to, condones, and aides America’s enemies in words, pictures, and deeds.

Thomas Jefferson foresaw a man like Barack HUSSEIN Obama someday ascending to the presidency when he said, “Do you want to know who you are? Don’t ask. Act! Action will delineate and define you” and now it’s way passed time for us to heed those wise words.

And as Obama’s actions define who he is our actions must define who we are…or our inactions will be America’s death knell. ‘We the People’ must demand in a united voice that Congress impeach and then arrest this president…a president who bows to our enemies…a president who bro-handshakes with Communist dictators…a president whose every action and every LIE dishonors all America is…a president who said and this is the most grievous of all, “It doesn’t matter since for all intent and purposes the US 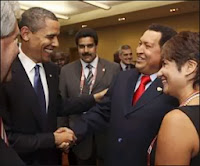 And like I said at the beginning, ‘Sometimes a picture is worth a thousand words’ but with Barack HUSSEIN Obama I’ll let these but a few of many pictures say it all…tell you all…better than I ever could.

And if these pictures bowing and kowtowing to our enemies are NOT a call to action then I do NOT know what is.

* Photo 1: Obama bowing and shaking the hand of Cuban dictator Raul Castro at Nelson Mandela’s funeral this pastMonday in South Africa, 2013
Photo 2: Obama bowing low to the Saudi King Abdullah at the European G-20 Summit, 2009
Photo 3: Obama warmly shaking the hand and smiling with Libya’s dictator Moammar Ghadafi at the G8 summit in L’Aquila, Italy, 2009
Photo 4: Obama bowing head to Ukrainian President Viktor Yushchenko during a visit Republican with Senator Dick Luga, 2010
Photo 5: Obama ‘bro-handshaking’ and laughing it up with dictator and America hater Hugo Chavez at the Summit of the Americas in Trinidad and Tobago, 2009
Photo 6: Obama warmly shaking hands with Hugo Chavez and patting him on the shoulder at the same summit, 2009
Photo 7: Obama bowing to Chinese Leader Hu Jintao at the Nuclear Security Summit, 2010