The 4th of July parade in Highland Park was cut short when a murderous idiot opened fire on unsuspecting participants.

Since the event is already being leveraged for political gain, let’s take a step back and examine what we do and do not know.

A lone gunman used an unsecured ladder to gain access to a rooftop overlooking the parade route. At about 10:14 am, maybe 10 minutes after the parade had begun, he opened fire.

Six people were confirmed dead, dozens of others wounded as he used concealment and confusion to rain violence down on the revelers below. The suspect was at large for hours before police finally apprehended the person they believe was responsible.

Five adults died at the scene and a sixth victim succumbed after being rushed to hospital, police said. The age of that victim wasn’t immediately known.

Of those injured, 26 people — ranging in age from 8 to 85 years — were taken to NorthShore University Health System hospitals with gunshot wounds to their abdomens and limbs. About four or five of them were children, authorities said.

At least one child was in a critical condition, police said.

Authorities believe the shooter had climbed onto the roof of a building overlooking the parade route using a ladder attached to the dwelling.

“It looks like access to the roof via a ladder in an alley was unsecure,” Lake County Major Crime Task Force spokesman Christopher Covelli said.

The rifle was later recovered from the roof, cops said, adding the shooter was “discreet and difficult to see” when he started firing. — NYPost

For context, this event happened in an affluent Chicago suburb. Chicago is a city where the Dem crime policies, limited police resources, and low murder conviction rate have been emboldening criminals and psychos who think life is cheap.

For example, the HeyJackass site keeps running statistics on the terrifying levels of violence in that city, specifically shootings. And the numbers are ugly without factoring this event into your calculations. 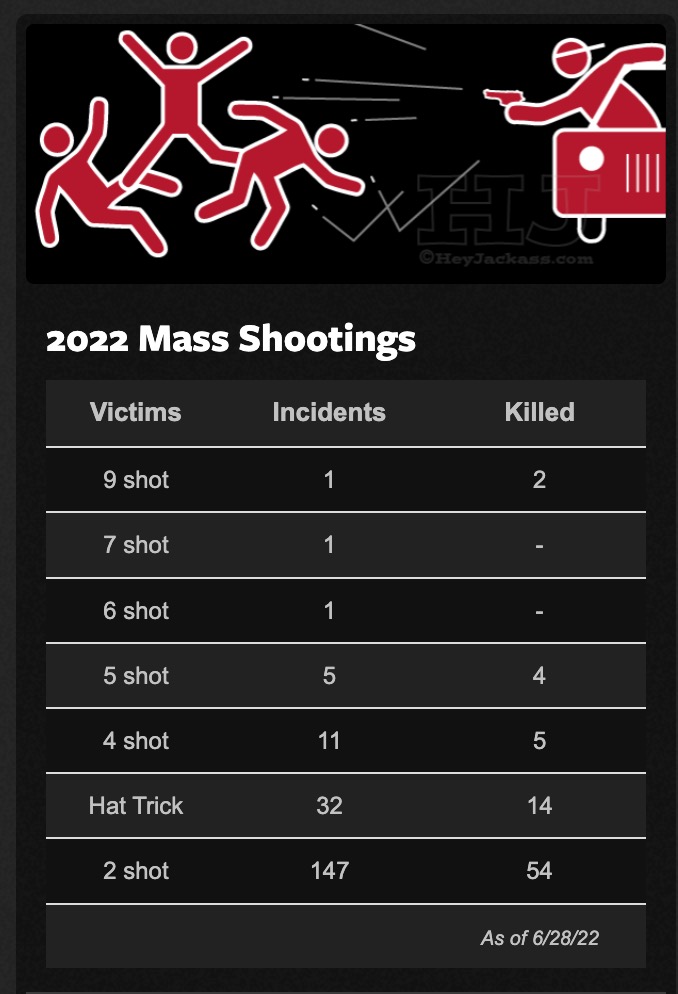 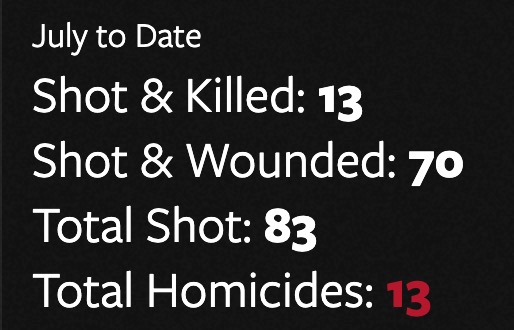 So it is important to understand this is one slice of a larger problem of a culture, not of ‘gun crime’ merely but of murder and a cheapened price set on the value of human life in and around the Windy City.

Issues laying at the root of that cheapened value of human life would be an enormous topic unto themselves.

Now we come to where things get complicated and political. It’s where people read their own prejudices into the story. Biden for example, has already spoken out about this incident, calling for further gun reform, yet has been conspicuously silent on the long list of other murders seen in Chicago and other major cities.

He has an agenda and whether elements of his agenda are the least bit related to the facts at hand, he’s happy to use the bodies of victims as a soapbox from which to pitch it.

What do we know of the suspect? He’s not coming from a poor-me ‘impoverished’ family.

Suspect’s dad is a businessman who ran for Mayor as a Republican in 2019 but did not win. His mom has an alternative medicine business.

The suspect himself, whose initials are R.C. was a rapper with about 16k monthly listeners and about $100k net worth. He has, in the past, produced videos whose themes would not surprise anyone familiar with the events that got him arrested, including standing in a classroom with a helmet and chest protection.

Much will be made, you can be sure, about RC’s presence at several events supporting Trump. But this writer does not have enough information to say whether he went in earnest because he supported some aspect of Trump’s policies, or whether he was going as a troll. 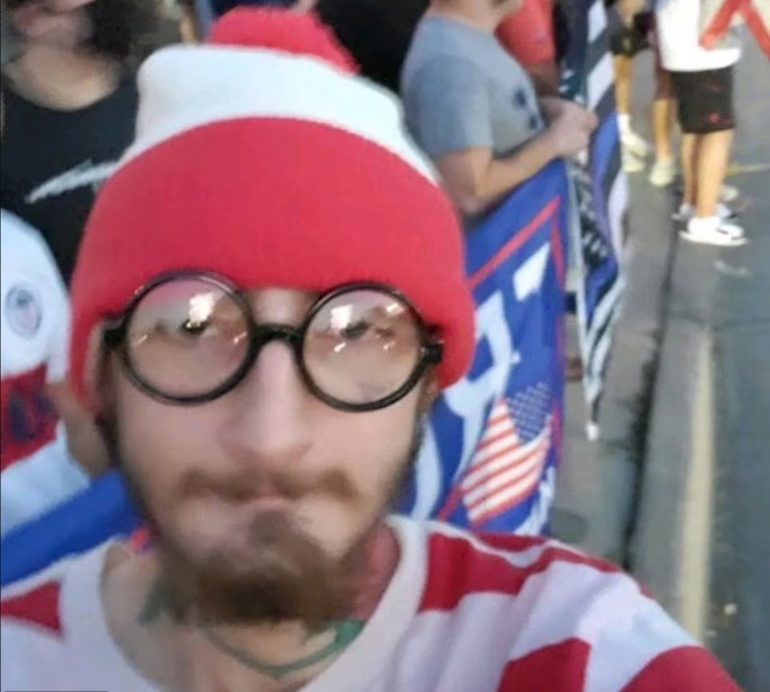 The fact that several of the photos circulating with him at one or more Trump events have him dressed as ‘Where’s Waldo’ leave us dubious about the seriousness of his support but, honestly, that is an unknown factor.

In the interest of full disclosure, there is a counter-claim to that which is not receiving anywhere near the circulation as the Trump-supporter narrative.

We include both sides principally to show that there is still a lot we don’t know, despite the narrative already spinning up.

We have not quickly forgotten the lesson of how selective the media can be depending upon the politics of the person committing the crime.

The media got miles of press out of the Walmart mass shooter in El Paso shooter, because he fit neatly into the media’s preferred narrative. But the mass-murder event in Dayton Ohio just days apart from that one? It was dropped like a hot potato.

Fox News reports that this ‘person of interest’ posted a very disturbing video in October 2021.

The rapper released a cryptic track called “Are You Awake” on Oct. 15, 2021. The track appears to suggest that Crimo was planning a life-defining act beyond his ability to stop. The video includes drawings of a man aiming a rifle at another person.

The video also includes an image of a newspaper clipping about Lee Harvey Oswald, who assassinated President John F. Kennedy, and another image of a victim shot with blood spraying from the body.

“Like a sleepwalker, I am unable to stop and think,” he says in the track. “My actions will be valiant and my thought is unnecessary. I know what I have to do, I know what’s in it, not only for me, but for everyone else.”

“There is no past or future, just the now,” he adds. “It is more abstract than I can ever imagine. I can feel the atmosphere pushing me in. It’s unstoppable, like a wave pulling me under, I can’t breathe without it.”

“I need to leave now, I need to just do it. It is my destiny, everything has led up to this,” Crimo says. “Nothing can stop me, not even myself. Is there such thing as free will, or has this been planned out, like a cosmic recipe?”

One Twitter user managed to grab the video before it was scrubbed.

Whatever his political leanings are, that is very disturbing. 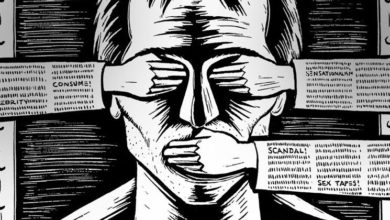 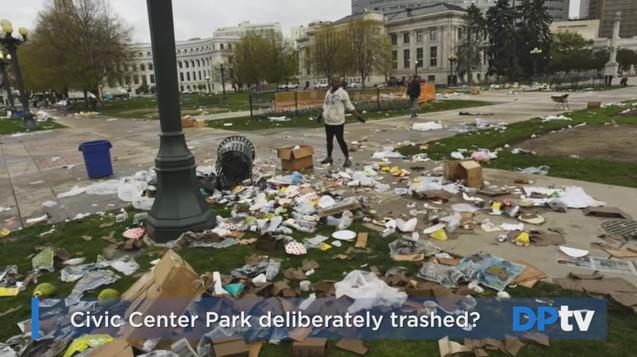