(Natural News) Brandon Straka, a former Democrat and founder of the #Walkaway movement that began in the months before the 2018 election, explained this week why he left his former party and why other Americans are leaving in unprecedented numbers.

“When people were feeling pushed away years ago, to the point where they were starting to walk away, there was more of a casual tone about it,” the former liberal Democrat told The Epoch Times. “People were beginning to feel the effects of leftist, communism, Marxism infiltration into our society, our culture, and our politics.”

After making his personal decision to leave the Democratic Party, Straka founded the #Walkaway movement and invited other Democrats fed up or frustrated with the party’s divisive, intolerant, far-left cultural ideology to join him. And since that time, thousands of former Democrats have made videos explaining that they, too, have left the party, choosing to walk away like Straka did.

At the time he founded his movement, Straka said that former fellow Dems were just beginning to see the big changes to their party. And while they could not always describe what they were seeing, they did know that it made them uncomfortable and no longer at home with the party, the activist noted further. So they just quietly left.

“But now, it’s akin to cancer. Cancer doesn’t stop growing and spreading just because people don’t like it. And what’s happening with the left is no different,” Straka told the outlet. “Particularly with them getting rid of Trump, installing Biden, and the Democrats taking full control of the government. This is a cancer that’s rapidly growing and spreading now. And it’s becoming not just uncomfortable, but I think intolerable, for a lot of people.”

He went on to tell the outlet that when comparing 2018 stories about why former Democrats left the party to those of today, things have gotten worse and far more extreme.

“People are truly scared, and they should be. I’m living proof that you might be sitting home, minding your own business, and the FBI might break your door down and take you to jail,” he said, adding that he was scheduled to speak at the U.S. Capitol Building on Jan. 6, 2021.

“When I got there, the doors to the Capitol were open, and I stood outside the building and shot a video for eight minutes, and then I published my video to Twitter. But while shooting the video, apparently, I had entered a restricted area,” Straka explained.

“And so the FBI raided my house in tactical gear, put me in handcuffs, took me to jail, and charged me with two felonies and a misdemeanor for occupying restricted grounds and for being a part of what they called impeding police officers in the line of duty,” he explained.

Straka’s update on his movement comes as another prominent figure, former Hawaii Rep. Tulsi Gabbard, announced that she, too, has left the Democratic Party.

“I can no longer remain in today’s Democratic Party that is now under the complete control of an elitist cabal of warmongers driven by cowardly wokeness, who divide us by racializing every issue and stoke anti-white racism, actively work to undermine our God-given freedoms, are hostile to people of faith and spirituality, demonize the police and protect criminals at the expense of law-abiding Americans, believe in open borders, weaponize the national security state to go after political opponents, and above all, dragging us ever closer to nuclear war,” she said in a Twitter post. 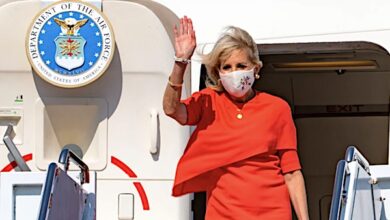