In a podcast interview that would not have been allowed on YouTube, medical scientist Dr. Peter McCullough charged that media and government censorship related to COVID-19 treatments have caused untold harm, contributing to many deaths.

Joe Rogan, the nation’s No. 1 podcaster, told McCullough that on nearly every other online platform, including YouTube, their conversation would be censored.

“But what you’re saying is incredibly important,” said Rogan, whose podcast, “The Joe Rogan Experience,” is streamed by Spotify.

“Censorship that has suppressed for two years information on safe and effective early treatment and censorship on vaccine safety has led to large numbers of deaths, hospitalizations and permanent disability,” McCullough said.

“There is no bigger public health crisis than the impact of censorship in COVID-19.”

“There is no bigger Public Health crisis than the censorship in COVID-19.”
– Dr. Peter McCullough
Joe Rogan Podcast # 1747https://t.co/ZXOVaAWvQP pic.twitter.com/enpmcoxlay

Joe Rogan – a comic and martial artist – has done the work of 20,000 dopey dishonest journalists.

McCullough has testified before the U.S. Senate on the suppression of early treatments that have been shown to be effective for COVID-19, including hydroxychloroquine and ivermectin. His concern about the COVID-19 vaccines centers on the unusually high number of reports of deaths and severe adverse events, such as myocarditis, compared to previous vaccines.

‘Why won’t they let the vaccine injured tell their stories?’
Social-media networks such as YouTube, Twitter and Facebook have been among the chief censors of the opinions of qualified physicians and medical scientists such as McCullough.

YouTube suspended the account of Sen. Ron Johnson, R-Wis., in early November after he posted video of a roundtable event with a panel of medical experts and vaccine-injured people discussing vaccine mandates.

“Once again Big Tech is censoring the truth,” Johnson said in a statement. “Why won’t they let the vaccine injured tell their stories and medical experts give a second opinion? Why can’t we discuss the harmful effects of mandates? Apparently, the Biden administration and federal health agencies must not be questioned. How many more lives will be needlessly destroyed?”

When the renowned British Medical Journal published a report on a whistleblower’s claim, supported by documents, of poor practices in the clinical trial of the Pfizer vaccine that could impact data integrity and safety, Facebook slapped a “false information” label on posts of the article.

Readers were directed to a “fact check” by Facebook contractor Lead Stories. The editors fired back with an open letter to Facebook CEO Mark Zuckerberg charging the “fact check” was “inaccurate, incompetent and irresponsible.”

Among other things, they wrote, it failed “to provide any assertions of fact that The BMJ article got wrong.”

In early 2021, Facebook censored WND articles providing evidence to support the theory that the pandemic originated with a leak from the Wuhan Institute of Virology. Now, with evidence continuing to mount, Facebook acknowledges it’s a plausible theory, if not the best explanation.

The mockery and censorship of the theory that the world-changing, novel coronavirus was engineered in a Chinese lab was fueled largely by a letter published in the prestigious British medical journal The Lancet by a scientist with a clear conflict of interest, Peter Daszak. The British zoologist received funding from Dr. Anthony Fauci’s National Institutes for Allergy and Infectious Diseases to help the “bat lady” researcher, Shi Zhengli at the Wuhan lab manipulate coronaviruses in animals and make them transmissible to humans.

Daszak’s February 2020 stated: “We stand together to strongly condemn conspiracy theories suggesting that COVID-19 does not have a natural origin.”

Two months after Daszak published his letter in The Lancet, he emailed Fauci to thank him for “publicly standing up and stating that the scientific evidence supports a natural origin for COVID-19 from a bat-to-human spillover, not a lab release from the Wuhan Institute of Virology.”

“From my perspective, your comments are brave, and coming from your trusted voice, will help dispel the myths being spun around the virus’s origins,” Daszak told Fauci in the April 18, 2020, email.

This week, the editor of The Lancet admitted he knew about Daszak’s links to the Chinese lab for a year before acknowledging the conflict of interests.

‘There is no science without disagreement’
Censorship of medical scientists such as McCullough prompted Hillsdale College to launch a new branch in the nation’s capital called the Academy for Science and Freedom. The aim is to combat “widespread abuses of individual and academic freedom made in the name of science.”

Scholars at the new academy include Drs. Scott W. Atlas of Stanford University’s Hoover Institution, Jay Bhattacharya of the Stanford School of Medicine and Martin Kulldorff of the Harvard Medical School.

Atlas, who briefly served as a member of the coronavirus task force during the Trump administration, said in a recent interview with Tucker Carlson that he was astonished at the “lack of knowledge about the data” displayed by Fauci and other members of the team.

“They never cited a scientific study. They never knew a critical assessment. They never gave a refutation of any study, nor a refutation or disagreement of each other. Never. Not once. I mean, that’s unheard of in science,” Atlas said.

“There is no science without disagreement.”

In June, amid growing evidence that the novel coronavirus was leaked from a lab funded by his agency, Fauci declared in an MSNBC interview that criticism of him amounts to attacks on science itself.

In October 2020, Fauci was asked by his boss, Francis Collins,  to carry out a “quick and devastating published takedown” of the Great Barrington Declaration, according to an email revealed Friday. The declaration — signed by 15,316 medical and public health scientists, and 45,154 medical practitioners — criticized universal lockdowns, calling for focused protection of the vulnerable older population based on data showing they are more than a thousand times more likely to die from COVID infection than the young.

Collins, who is stepping down as director of the National Institutes of Health, said the proposal came from “three fringe epidemiologists,” meaning Dr. Martin Kulldorf of Harvard, Dr. Jay Bhattacharya of Stanford and Dr. Sunetra Gupta of Oxford.

Collins: We need to figure out how to influence human behavior
In a recent interview with NPR reflecting on his 12 years with NIH, Collins lamented “the 60 million people still holding off of taking advantage of lifesaving vaccines,” which he said “is pretty unexpected.”

“It does make me, at least, realize, ‘Boy, there are things about human behavior that I don’t think we had invested enough into understanding.’”

Collins said the nation “basically have seen the accurate medical information overtaken, all too often, by the inaccurate conspiracies and false information on social media.”

“It’s a whole other world out there. We used to think that if knowledge was made available from credible sources, it would win the day. That’s not happening now,” he said.

NPR’s Selena Simmons-Duffin asked Collins if more money should be invested “in the behavioral research side of things.”

“We’re having serious conversations right now about whether this ought to be a special initiative at NIH to put more research into health communications and how best to frame those [messages] so that they reach people who may otherwise be influenced by information that’s simply not based on evidence,” Collins replied. “Because I don’t think you could look at the current circumstance now and say it’s gone very well.”

Remember nine months ago when they promised everyone that if they got vaccinated, they wouldn’t get COVID, they could remove their masks, and they could travel freely?

Not a single one of these things was true.

Folks, if you’re fully vaccinated — you no longer need to wear a mask.

If you’re not vaccinated yet — go to https://t.co/4MYpWqXVVo to find a shot, and mask up until you’re fully vaccinated. pic.twitter.com/qcyG2WyCG2

Seriously, when is it going to end? pic.twitter.com/gOPMuiXqcH

So to clarify, the NFL, NBA, and NHL—professional sports leagues with some of the healthiest people in the world—are each seeing massive COVID outbreaks despite vaccination rates over 95%, but somehow increasing vaccination is supposed to end COVID? 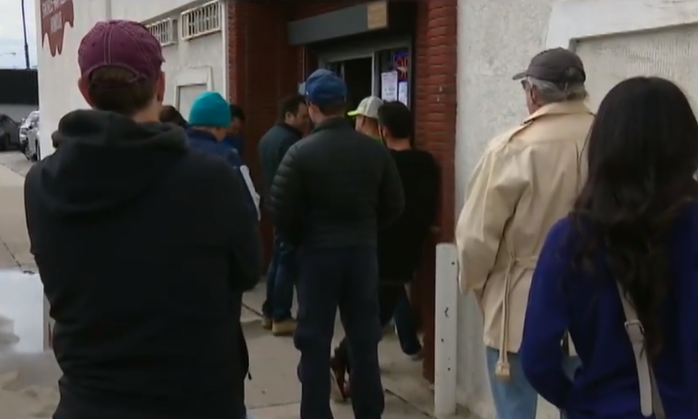