In Davie, Florida there are some color-blind people. I say that because on October 3, one of them panicked when she saw a toy gun and called the police, according to the Miami Herald. As police activity ramped up, three local colleges went into lockdown “as a precaution.” 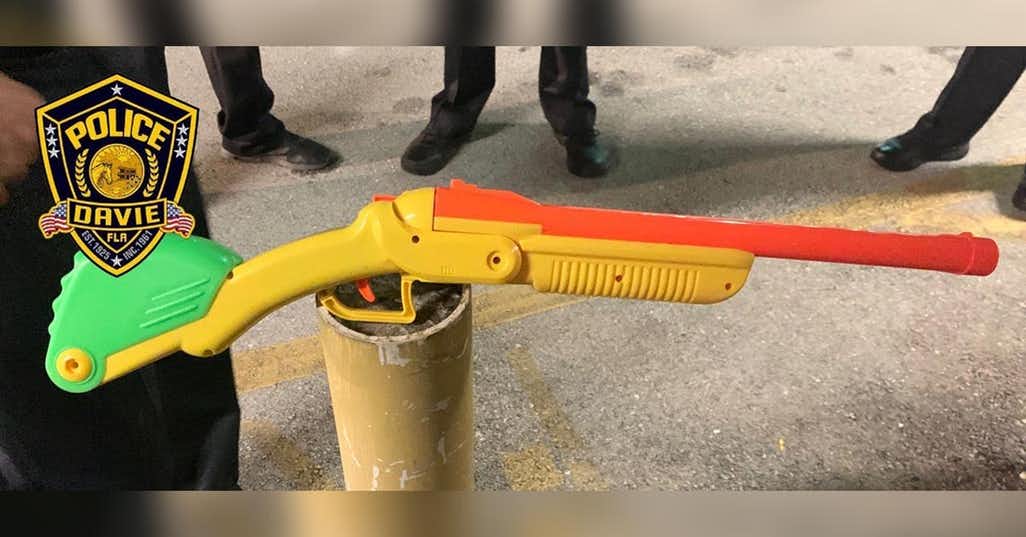 BC Alert: Central Campus – Shelter in place. The campus is on lockdown due to police activity in the area. Please await further instructions.

NSU ALERT: NSU Davie campus in lockdown due to Police Activity in the area. Please remain indoors until Davie PD has given the all clear.

The lockdown lasted 3 hours, and involved numerous police personnel. They finally located the “suspect” as he was walking along a street far away from the campus. He was carrying a black umbrella and a toy shotgun that was yellow, orange, and green.

The original reporting party said he “pointed the gun” at her. The woman must have been completely color blind – it’s yellow, orange, and green. Have you EVER heard of a real gun in those ‘neon’ colors? Don’t worry, if gun manufacturers ever start making real ones in those particular colors, we’ll let you know.

Police said that the man never pointed the gun at anyone. But  they confiscated his toy shotgun for “evidence.” The “suspect” is 60 years old, and police did not arrest him at the time, but said there will be an “investigation.”

After clearing the scene at the #Davie college area. A #DaviePolice officer located an individual with this toy gun walking on Stirling Rd. They both matched the description given by the witness. The toy gun was collected and the investigation was turned over to detectives. pic.twitter.com/mLC8BmUn8L

Let’s see: Florida’s red flag laws are being abused so badly that they are issuing ERPOs – Extreme Risk Protection Orders – to children, one of whom was only 8 years old. Fox4 reported,

Florida’s new red flag law – created to protect the public from future mass shooters – has temporarily stripped gun rights from more than 2,500 people across the state, including at least 100 kids, an I-Team review found.

Now we have a 60 year old man carrying a completely harmless toy gun having it confiscated by Davie Police.

Where did common sense go? Did the Grinch snatch it along with Christmas?