A waiter at Saltgrass Steak House in Odessa, Texas claimed that a customer wrote “We don’t tip terrorists” on their bill on July 14. The customer was banned from the restaurant. When he posted it on Facebook, the outpouring of sympathy brought in $1000 in tips. According to the Odessa American, on Monday, July 23, the Steakhouse revealed that it was all a lie. 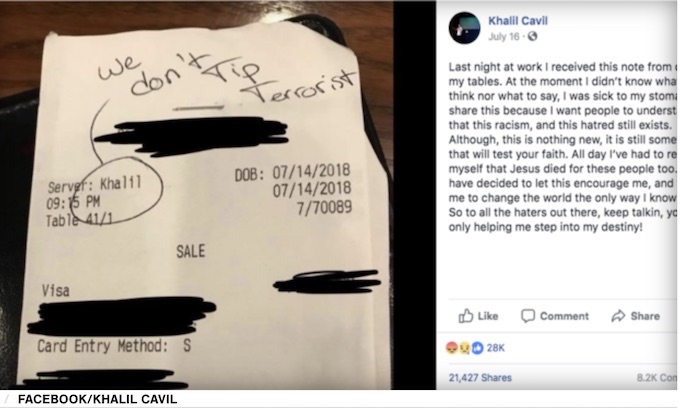 Khalil Cavil is 20 years old, old enough to know better. His Facebook post on July 16 went viral, and garnered him sympathy and money. He claimed he was working to obtain the funds to attend college in Dallas.

Cavil admitted to a reporter that he lied about the handwritten note on the bill.

“I did write it. I don’t have an explanation. I made a mistake. There is no excuse for what I did.” Khalil Cavil

The restaurant found out that he lied and terminated his employment. It is unclear how they found out about it.

“After further investigation, we have learned that our employee fabricated the entire story. The customer has been contacted and invited back to our restaurant to dine on us. Racism of any form is intolerable, and we will always act swiftly should it occur in any of our establishments. Falsely accusing someone of racism is equaling disturbing.” Saltgrass Steak House COO, Terry Turney

Cavil claims that he is in the process of returning all the money that was sent to him.

At one point he stated he was trying to “start a conversation about racism.” The only conversation he started was what an idiot he was to make up a story like that.

It’s not the first time, nor the last, that someone will try to gain attention by claiming to be a victim of “racism.”

The problem with lying is that it eventually comes back to haunt you. This young man lost his job, and is now the subject of ridicule instead of  honor.