The “Gray Lady” seems to have lost her marbles.

The New York Times tweeted out a promo for a new podcast that is going to tackle the issues that are plaguing the American public education system. “To understand what’s wrong with our public education system, you have to look at what’s arguably the most powerful force in our schools: White parents. Listen to the trailer for “Nice White Parents,” a new series from @serial, brought to you by @nytimes.”

To understand what’s wrong with our public education system, you have to look at what’s arguably the most powerful force in our schools: White parents. Listen to the trailer for “Nice White Parents,” a new series from @serial, brought to you by @nytimes. https://t.co/ljXOFNOZFO

There are a couple of big issues with this tweet.

The NY Times says that the public school system doesn’t provide equal education and most often fails “black and brown” students. Often, when the failures of public schools are discussed, the questions “Why aren’t they performing better? Why aren’t they achieving more?” is where the focus is. NYT says, “Those are not the right questions.”

If you want to understand what’s wrong with our public education system, you have to look at what is arguably the most powerful force in our schools: White parents.
Source: NEW YORK TIMES (ARCHIVED)

"What's wrong with this particular thing? THIS RACE OF PEOPLE!" – things racists say

Your racism is showing. Again.

So not even hiding your racism.

Really pushing for that race war you want, aren't you?

Some groups do fine in the US public education system. The problem isn’t the parents of one of the groups who do fine.

But, we get it, Social Justice is about blame it on whitey, and the NYT is now just a propaganda wing of that message.https://t.co/z4LWeRvPYE

Yeah, parents are the problem… pic.twitter.com/SV0k0qWDLo

Are you really surprised that this is where the New York Times has gone?

They published The 1619 Project which posits that America was really founded on the practice of slavery and is therefore inherently racist. Despite it’s Pulitzer Prize, The 1619 Project is riddled with inaccuracies and has been rebutted many black journalists, scholars, and community leaders as well as top historians. There’s even a counter-movement called 1776 Unites that will provide materials to K-12 schools now that The 1619 Project teaching materials will be furnished to public schools. The author of The 1619 Project, Nikole Hannah-Jones, has called white people “barbaric devils” and has a history of spouting anti-white racism.

Speaking of Nikole Hannah-Jones, it seems that Chana Joffe-Walt, the new host of the podcast being promoted by the NYTimes, had worked with Jones to write a few stories about education and school segregation. 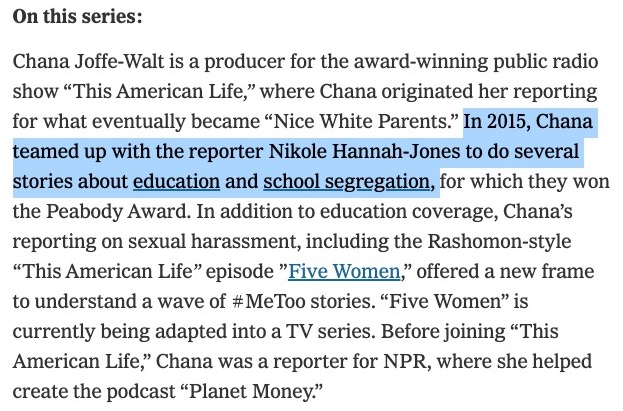 Gee, I wonder if that had any sort of influence on Walt’s perspective…

The New York Times isn’t even bothering to hide their bigotry anymore. At least they’re being honest about it.

It’s just too bad that the thing that they’re honest about is blatantly racist. But hey…it is the New York Times, after all–they’ve been anti-Semitic for years and maybe this is just an attempt to branch out into a new form of bigotry. We can’t expect them to completely rebrand, right?

Lifechanging News as Trucker Who Nearly Hit Dozens of BLMers Before Being Attacked Will Walk Free
June 19th, 2021 Flag And Cross
Tweets by Conservative Firing Line