Tuesday of next week, just a week from tomorrow is the big day. Overpasses for Obama’s Impeachment will hold rallies, calling on Congress to impeach President Barack Obama, in numerous states as part of what they call the “Patroit Wave.” James Neighbors, National Coordinator and Founder of a movement called Overpasses for Obama’s Impeachment, announced also, “We’re dedicating The Patriot Wave on 8/6/13 to those lost in Extortion 17.”

The Overpasses movement has held rallies for Obama’s impeachment in more than 40 states and in several locations. The members of the Overpasses movement regard President Obama as so thoroughly involved in the scandals as to warrant his impeachment. Neighbors said, “His administration is the most scandal ridden that I have ever known of. His policies fly in the face of the U.S. Constitution. For anyone to say he has no knowledge or part in the growing list of scandals is simply astonishing. Nixon said the same thing, and history shows how deep his involvement actually was.”

Citizens will rally in most states on August 6, including members of the movement in Northern Idaho, who plan to organize events on Interstate 90 between Post Falls and Wallace, Idaho. Joe Newby’s article on the Northern Idaho group quotes Don Nolan, of the group, as saying, “My dream is to see a single mom driving under the overpass, and Google ‘impeach Obama,'” said Nolan, who admitted being a former Obama supporter, believing he was something new, interesting and necessary at the time.”

The movement was inspired by protestors in Carlsbad, California made news in June of this year holding a protest on a nearby highway overpass on Interstate 5 on June 8. The protesters held up a variety of “Impeach Obama” signs and the demonstration slowed down southbound traffic on the highway for hours.

“I believe that when We the People speak, Congress will listen and act. If for no other reason, than job preservation, Neighbors said, “We’ve all seen Obama’s ratings continue to fall. This is with a media that is by and large sympathetic to him. Congress members understand this as well. 2014 elections are coming up, and having seen elections in the past, many politicians will begin to attempt to distance themselves from Obama as they run for re-election.”

Anyone who desires to see real change in this country’s direction and seek President Obama held accountable for his actions and decisions that have come to light in all the various Obama-gate scandals as well as Benghazi, are urged to get involved in the Overpasses movement in their state or area. This page hosted on a blog site called Ann Loves America lists the Facebook groups for the Overpasses groups in all 50 states. Use that link to find your state group and within that group one can link up with local members to either participate in or organize a rally in your area to help demand that Congress impeach the president.

Read the best of Dean’s News and Commentaries here at QstarNews. 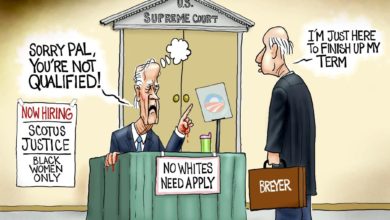