Yes, these shortages are really happening, and now the mainstream media is warning us to brace ourselves because they are going to get even worse.  After the article that I posted yesterday, emails came pouring in from people all around the country.  There were a few that didn’t want to believe that things are as bad as I was saying, but there were lots of other emails that confirmed that conditions are at least as bad as I described.  In fact, there was one extremely alarming email from someone that works in the supermarket industry that I hope to share with all of you in the coming days once I get permission to do so.

For most of us, we have lived our entire lives without ever having to be concerned about shortages.  In fact, just a few years ago it would have seemed crazy to suggest that we were on the verge of widespread shortages here in the United States.

But now here we are, and we are being told that the shortages are going to continue to intensify.  In fact, the Washington Post is telling us that the global chip shortage is showing signs of “worsening”…

A wave of delta-variant cases in Malaysia, Vietnam and the Philippines is causing production delays at factories that cut and package semiconductors, creating new bottlenecks on top of those caused by soaring demand for chips.

That is really bad news, because the chip shortage is affecting thousands of other industries.

For example, global vehicle production is way down due to the chip crisis, and this has resulted in a growing shortage of new vehicles on dealer lots all over the nation…

The chip famine is starving the global auto industry and putting car buyers on a strict diet. So far this year, seven million cars that were supposed to be produced haven’t been, according to IHS Markit data. Auto companies are shutting down production lines for weeks at a time and furloughing employees as a result of the chip shortage. Toyota has slashed its production 40% in September.

All this is hitting consumers. Car dealers’ lots across the U.S. are sparse. The inventory of new cars in the U.S. is only about 30% of pre-pandemic levels, and buyers snap up used cars as soon as they find them.

Of course we aren’t facing a shortage of everything.

There are certain products that are still quite plentiful.

And there are some areas that are being affected a lot more than others.

So what you are seeing in your neck of the woods may differ from what other people are experiencing.

But there are some shortages that are definitely being felt all over the country.

When the COVID pandemic first started to sweep across the U.S. last year, it sparked a huge run on toilet paper, and now it is starting to happen again…

The membership-only warehouse retail chain is issuing a warning to customers that have purchased the common household item online, saying they may face delays in receiving their orders.

Unfortunately, this could potentially be just the beginning.

According to one expert that was interviewed by Fox Business, there will soon be another “massive shortage” of toilet paper…

The U.S. will experience another “massive shortage” of toilet paper soon as supply chains continue to suffer due to pandemic-related issues, one retail expert warned.

“Product shortages as bad as they were in the beginning of COVID are coming back,” Burt Flickinger said on FOX Business’ “Mornings with Maria.”

Did you ever imagine that we would be talking about such a thing in late 2021?

A lot of optimists out there had assumed that the economy would be “booming” by now.

But instead, the machinery of our economy has gotten gummed up really badly.  At this point, there is even a growing shortage of alcoholic beverages…

The Pennsylvania state board in charge of consumer liquor sales announced last week that it was limiting customers to two bottles of certain alcoholic beverages per day. The Pennsylvania Liquor Control Board said the purchase limit on select items — including Hennessy Cognac, Buffalo Trace bourbon and Patrón tequila — will be in place for the “foreseeable future.”

Liquor store customers in North Carolina are encountering “out of stock” signs instead of their favorite spirits, local TV station WTVD reported, amid an ongoing supply shortage there, too.

Of course so many of these problems could be solved if we simply had enough workers.

As I discussed the other day, we are in the midst of the worst labor shortage that we have ever experienced.  All over the nation critical labor shortages are crippling the ability of organizations to get things done, and now Joe Biden’s new mandates threaten to make things a lot worse.

If you can believe it, even NPR is running stories about how Biden’s mandates are going to cause gigantic headaches for employers…

“I can’t afford to lose anyone,” says Ted LeNeave, CEO of Accura HealthCare, which operates 34 nursing homes and assisted living facilities in Iowa, Minnesota, Nebraska and South Dakota. Because of staffing shortages, they’ve had to limit admissions, turning down patients coming from hospitals.

With about 1,000 of his employees — 38% of his workforce — unvaccinated, LeNeave is calling on the federal government to provide a testing option for health care workers.

Sadly, if Biden does not change his approach, that one company alone will have to let about a thousand workers go…

“I just don’t see how I can lay off a thousand people,” says LeNeave. “I’d have no one to take care of the patients, and there’s nowhere to send the patients.”

Biden’s mandates should start going into effect around the end of the year, and that could represent a real turning point for the economy.

We are moving into such troubled times, but most people desperately want to believe that better times are just around the corner.

But the truth is that things are starting to break down on a very basic level, and the outlook as we head toward the end of the year is not good at all. 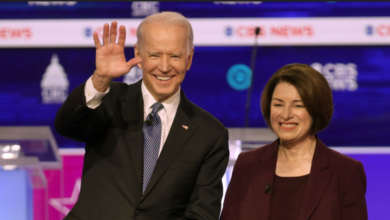 The God Complex: Can Democrats Stop Hurricanes? Not.