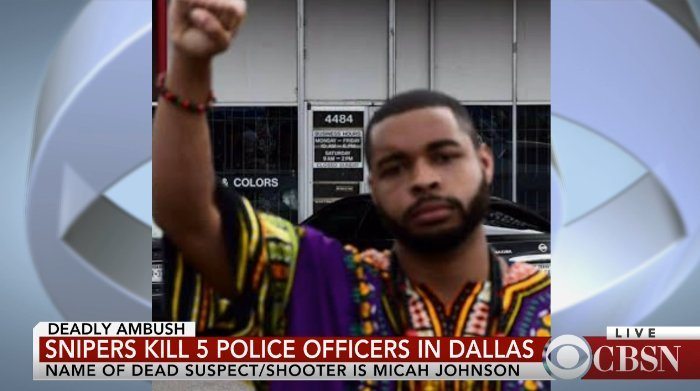 On Friday, CBS News reported that the suspect in the devastating Dallas attack that saw five officers murdered has been identified as 25-year-old Micah Xavier Johnson of Mesquite, Texas.  Naturally, anti-cop hatemongers on Twitter responded by calling him a “hero.”

Rip Micah Xavier Johnson, we need warriors like you

Despite earlier reports, Johnson said he had no affiliation with any group.

He did, however, tell police he wanted to kill white people, especially police officers.

Just before 3 a.m., one of the suspects died after a long standoff. During negotiations, he said, “The end is near.” The man was eventually killed by police, who used a robotic explosive device.

“We cornered one suspect, and we tried to negotiate for several hours,” Brown recalled. “We had an exchange of gunfire with the suspect, and we saw no other option but to use our bomb robot and place a device on its extension for it to detonate where the suspect was. Other options would have exposed the officers to grave danger. The suspect is deceased as a result of the detonating the bomb.”

That slain suspect was later identified as Micah Xavier Johnson, from Mesquite, Texas.

Earlier, we reported that Black Lives Matter supporters celebrated the murder of five Dallas officers.  Now we have racist hatemongers calling the assassin a hero.

This, of course, is thanks to the race-baiter-in-chief, Barack Hussein Obama, who, according to one law enforcement group, has declared war on cops.

Yes, Obama, you built this…

Throw It onto Him
May 18th, 2021 TCP News
Tweets by Conservative Firing Line