The First Amendment has been severely compromised, thanks to the censorship of leftists in Big Tech. But gun control groups are aiming for the Big One: the Second Amendment, and using rhetoric like “insurrection” to push it forward. And that’s not counting the screaming of “terrorists” coming from the idiots at CNN. Or the US Attorney considering “sedition” charges against the people who “stormed” the Capitol on January 6. (Reuters)

Strikes me as yet another needless escalation. Terrorists use violence — particularly the mass death of civilians — to seek political ends. These people were anti-democratic hooligans, but they weren’t driving trucks through crowds or flying planes into buildings.

I don’t recall a single time CNN/MSNBC referred to violent BLM activists as “terrorists,” even though their tactics terrorized the general population far more than yesterday’s uprising. If the media wants to help quell this chaos, they need to look at their own role in this mess.

But the gun control groups are gearing up to push that rhetoric as far as they can. Remember that quote? “Never let a good crisis go to waste?” They are not letting it go to waste. Here’s a few of the tweets from the “Coalition to Stop Gun Violence”:

Terrorists in @NRA hats stormed the Capitol in an act of treason on Wednesday https://t.co/XnvxMlS28J

.@JoshuaMHorwitz: We have to understand that language about fighting tyranny is racist and understand the power structures it's protecting. We can give no countenance to any individual right to revolution.

.@KrisB_Brown of @bradybuzz: We need to recognize #gunviolence as a public health epidemic. We need to end the NRA.

Newsflash: The NRA did not cause the violence in DC on January 6th.

This week's deadly attempted coup was fueled by President Trump and those who have perpetuated the lie of a stolen election.

Lives are at stake. Send your member of Congress a message telling them to remove Trump from office immediately.

This week, members of Congress might have finally understood what we have grown up experiencing because of America's gun violence epidemic.

We hope they channel their anger and use this crisis to finally enact common-sense gun reform. https://t.co/oW3pyWzz24

Note who is still on Twitter, after they yanked off President Trump, Michael Flynn, and Sidney Powell.

Gun Control Groups Agenda would not have stopped January 6th

Here’s where truth comes in: The man from Michigan, Logan Grimes, who was arrested in DC with a gun was NOT a Trump supporter, and neither is his father. The unarmed veteran shot by Capitol Police was a fan of “Q” and just wanted to be part of the “storm.” She made an unwise choice and lost her life because of it. But the problem is that now the gun control groups are rapidly pushing a totally unconstitutional agenda. And none of it would have stopped January 6th in DC.

Even in Michigan, the Democrats are revisiting the day that legally armed citizens walked into the Capitol building in Lansing. They didn’t “storm” the building, they walked into it. But that doesn’t matter: the divisive rhetoric has gone off the rails.

“The blood will be on the hands of anyone in any type of power, who has a platform, who does not use that platform to lower the temperature and anyone who does not vote in favor of banning guns in the state capitol building and holding lawmakers accountable, who continue to incite violence.”

“Blood on their hands.” “Terrorists.” “Insurrection.” This kind of rhetoric stirs up the uninformed, the people who watch outlets like MSNBC and CNN. The Biden administration has made hundreds of comments about getting your guns. Will our Constitution be ravaged even further? Be aware. 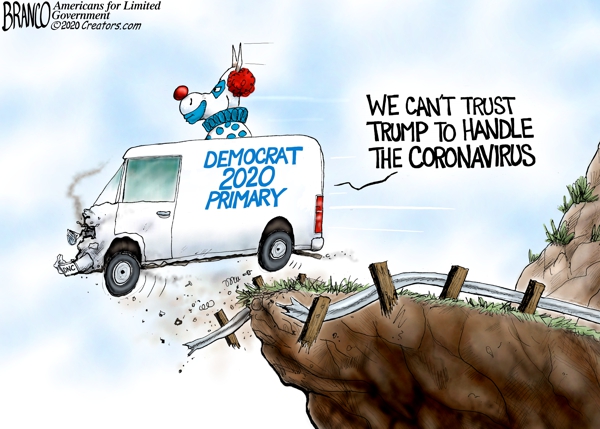 Cartoon of the Day: Clowns To The Left of Me