The left called for criminal investigations claiming this amounted to human trafficking of the Martha’s Vineyard story. They should be SCREAMING about this group!

Obviously, they cared more about taking a Republican scalp than they did about preventing an alleged crime. When the story changes to involve a clandestine planeload of teenage girls shipped to an uncertain destination in the middle of the night by Biden’s own administration, those same activists fall strangely silent.

More than that, AOC famously led the propaganda war against Trump, claiming he was ‘separating children from families’ — a complaint that no longer seemed to bother Democrats once Joe Biden opened the floodgates at the southern border which resulted in a great many children being separated from their families.

We’ve already seen that Democrats — whether in the education system, or elected Democrats like Biden’s DOJ — hold parents in some level of contempt.

They actively teach children a view of the world anchored in the left’s favorite race-based, anti-American, anti-capitalist, anti-family, secular talking points, while demonizing and silencing anyone who dares to expose that agenda to the broader public.

Worse still, they justify secretive relationships between teacher and student cutting parents completely out of the loop… sometimes with disastrous consequences. In some cases, children have made attempts on their lives while parents were deliberately kept ignorant of the personal struggles their own kid had been discussing with their teachers at school.

We’ve seen parents are labeled ‘terrorists’ or even arrested for bringing valid complaints to school boards including one angry father whose daughter had been sexually assaulted in the school bathroom. If you really want to see the left lose their minds, call out the similarities between their agenda and the tactics of sexual predators dubbed ‘groomers’ and watch what happens.

But surely Democrats would never cheer on teen runaways, would they? After all, teenage runaways are exposed to a whole world of dangerous situations that most of us can scarcely imagine.

They would do more than cheer them on. They have set up a network to enable it. All in the name of ‘helping’ sexually confused kids, of course.

An organized network for separating teens from their parents…

This week, Daily Wire ran a story exposing the startling agenda of Pride Liberation Project. It’s an organization that not only uses social media channels to ‘organize’ teenage students but which also uses money to help children run away from their parents.

A Virginia pro-trans group with Democratic ties says it will help gender-confused students leave their families and “rehome” them with new “queer friendly” guardians instead, according to internal materials obtained by The Daily Wire.
…But materials from the group’s internal message board show that its plans go much further than a walkout. A “#resources-for-outed-students” channel, created by Rawal, said the group would help children run away from their parents and arrange for them to be placed with new “Queer friendly” guardians.
“We’re creating this channel as a way for everyone to understand the mutual aid and support resources the PLP has available for outed and in-crisis students! For full transparency, this channel is catered to outed students who are facing familial rejection or need to leave their home for another reason,” he wrote.
“In the event of you needing to leave your home, we can provide you with emergency housing from a supportive, Queer friendly adult,” he continued, cautioning: “Please note that this adult will likely be white.” –DailyWire

They are offering to cover the cost of your Uber or Lyft to help you run away from home so that these confused kids can go live with a stranger who encourages teens in questioning their gender.

How could such a plan *possibly* go wrong?

Even well-intentioned plans by Biden’s government to house migrant children have been criticized for the potential to expose children to harm:

Portman said he is worried about the Biden administration’s call for all employees of government agencies to help out at HHS facilities working with children in custody, describing it as a recipe for disaster and that the bureaucrats themselves could be a danger to children.
“While I am not aware of any wrongdoing yet, I am concerned that those employees could pose a risk to children — either because of potential intentional bad acts or because they are not properly trained or credentialed to work with children — especially those who have faced traumatic circumstances in their home countries or on their trip to the border,” Portman wrote in an email. “I would hope that HHS would share … the type of background checks, if any, that HHS completes before the federal employees arrive to care for the children.” –WashingtonExaminer, July 2021

If paying for children to run away form home is not ‘separating children from their families’ what is?

So who’s paying for all of this?

It’s a sophisticated operation. As the Daily Mail explains:

It also promised to falsify documentation to hide a minor’s activities from their parents. A section titled “Covers/Alibi” said “If you attend an event or protest, we can work with you to craft a valid, non-Queer reason for you to have been there. Sometimes this may be a bit challenging, but we can use official sounding non-Queer related email addresses, email addresses from prestigious universities, and other resources.” –DailyMail

Not only is it a sophisticated operation, but their tactics are eerily similar to those employed by actual human trafficking organizations.

It might be worth having law enforcement look into what’s really going on in this Virgina group (not that we trust todays’ politicized Federal law enforcement to give a damn about it), but groups like this can’t operate without money. Who’s funding them?

They are getting bankrolled by one of the biggest games in town.

Their funding stream is named in the article:

The group, which raises money using the Democrat platform ActBlue, said it can also provide significant money to youth who want to leave their parents. “We can pay for Ubers, Lyfts, and other passes if you need to leave immediately. Some students or adults may also be able to come get you individually,” Rawal wrote. — DailyWire

ActBlue was founded in 2004 by Benjamin Rahn and Matt DeBergalis In February 2016, ActBlue launched AB Charities, an arm of the organization that makes ActBlue’s fundraising tools available to nonprofits. Both the 2016 and 2020 Democratic presidential nominees, Hillary Clinton and Joe Biden, used ActBlue during their primary and general election campaigns. Bernie Sanders’ 2016 and 2020 primary campaigns also used ActBlue for fundraising.
…In 2019, ActBlue raised roughly $1 billion for a wide variety of campaigns. The Daily Beast notes that between January and mid-July 2019, ActBlue brought in $420 million, and that “According to the organization, that total came from 3.3 million unique donors and was dispersed to almost 9,000 Democratic campaigns and organizations, with $246 million coming in the second quarter alone.”
In 2020, several fundraising records were broken. In the week following the murder of George Floyd, on May 31, over $19 million was raised, the highest single-day total so far that year. On June 1, that yearly record was again broken with $20 million in donations. Over half of donations in the week following the killing went to charitable (non-political) causes, including one ActBlue page devoted to a bail fund which raised over $1.5 million from over 20,000 donors. In the day following the death of Supreme Court Justice Ruth Bader Ginsburg, over $30 million was donated through ActBlue, again breaking the single-day fundraising record.
In 2022, ActBlue brought in $20.6 million on the day the Supreme Court issued its opinion in Dobbs v. Jackson Women’s Health Organization. –Wiki

Are these groups breaking any laws?

We’ll leave it to authorities to determine the answer to that question. But ActBlue might want to rethink their involvement with this cause, if there is any truth to a concern raised about a similar situation by a whistleblower for the groups moving children around on Biden’s behalf. 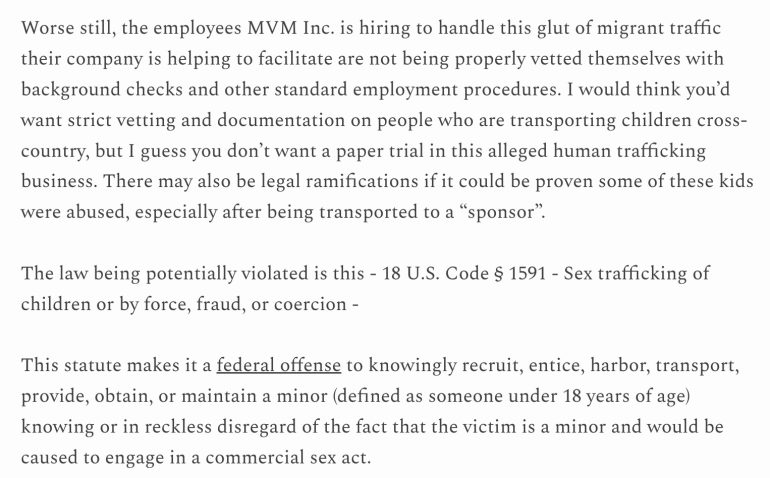 The ‘sponsor’ relationship to moving these children could trigger exposure to ‘reckless disregard’ criteria of sex trafficking charges should harm befall ANY of the teens being approached for ‘rehousing’.

Do you remember back in 2020 when politically-motivated lawsuits levied against the NRA were used to tie up their ability to raise funds for Republican causes in the middle of an election cycle?

Democrats might want to be careful what precedents they set.