A Coast Guard member has been removed from the hurricane response for making a hand sign that people claim is a “white power” sign, according to the Gateway Pundit. When we grew up it meant “OK.” Which had nothing whatever to do with racism, it just meant all right, or everything’s fine. But the use of it now has become “offensive.” 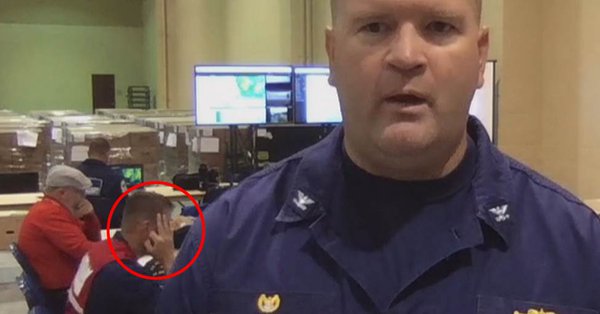 We are aware of the offensive video on twitter – the Coast Guard has identified the member and removed him from the response. His actions do not reflect those of the United States Coast Guard.

They said the same thing about an intern who was sitting directly behind Judge Brett Kavanaugh during the hearings as well. Her action was soundly discredited as a random holding of her hand.

This situation appears deliberate, unless he was scratching the inside of his ear. And he didn’t appear any too happy about having a camera shoved in his face.

US Coast Guard on hand gesture seen used by a support staff member (bottom left) during an interview on @MSNBC this afternoon:

“The Coast Guard has identified the member and removed him from the response. His actions do not reflect those of the United States Coast Guard.” pic.twitter.com/jjwZmCFFBI

The problem with this whole “white power” sign thing is that it’s in the eye of the beholder. The above outlets are news groups that tend toward the liberal side of things and Scott Spencer is an activist aka “social justice warrior.” They are only willing to see through their jaded view, even if the man in question was trying to say the Coast Guard has this hurricane response and everything is going to be “OK.”

The incident is now under investigation. IF he is a white supremacist they’ll quickly learn the truth. If he’s not, then the liberals have destroyed the career of a person based on their perceptions.

“The man has since been removed from the Florence response operations and the incident is under investigation. Whatever that symbol means, it doesn’t reflect the Coast Guard and our core values. It won’t be tolerated.…We’re not going to let one person detract from the good work the Coast Guard is doing in the region. We’re going to stay focused.” Coast Guard Lt. J.B. Zorn to NBC news

Note, according to the ADL, (Anti-Defamation League) the so called “white power” sign was originally a 4chan operation called O-KKK designed troll liberals. But it certainly has a life of its own now.