We thought this argument went away with the election of John F. Kennedy back in the 1960s, but apparently not.  An op-ed published at CNN Politics on Tuesday by Digital Director Z. Byron Wolf prompted a great deal of criticism on social media for asking why Catholics “hold a strong majority” on the Supreme Court.

There’s only ever been one Catholic president and Catholics are a declining portion of the US population, but they’re holding a strong majority on the US Supreme Court.

When President Donald Trump nominated Brett Kavanaugh to the Supreme Court Tuesday night, Kavanaugh described his Catholic faith and the importance of the church in his life — from the high school he attended to the Catholic Youth Organization basketball teams he now coaches.

If confirmed, Kavanaugh will replace Anthony Kennedy, who is Catholic. Trump’s other nominee, now-Justice Neil Gorsuch, replaced Catholic Antonin Scalia. Gorsuch attends Episcopal churches now, but was raised Catholic. CNN’s Daniel Burke has written that about Gorsuch’s faith, which he keeps private, and it is a complicated matter.

Democrat-appointed Sonia Sotomayor, Wolf said, “was raised Catholic and during her nomination was described as a ‘cultural Catholic.'”

“A justice’s religion does not, nor should it, matter,” Wolf said.

So why mention it?   Wolf explained: “But it is certainly a curiosity of modern politics that Catholic and Jewish justices have found such success. It is hard to find demographic information on the federal judiciary at large to see if Catholics justices play an outsize role at the lower levels. A Congressional Research Service report providing a demographic snapshot of the courts did not include religion.”

Naturally, this didn’t sit too well with many who saw this as an attack on Christians in general and Catholics in particular.

Hope you’ll do more of these identity group stories along the lines of “Why do ________ hold a strong majority in/on ________?” It’s interesting to see who dominates in particular areas. Oh. Wait. You’re just bashing Christians with no intention of expanding the inquiry. My bad.

Nothing like some good Catholic bashing to start the day.

That’s what it looks like to us.  Would Wolf have written this if Kavanaugh were something other than a Catholic?  We doubt it.

Two paragraphs in Wolf’s screed shed some light on the issue:

Judicial nominees these days are loath to answer how they’d vote on cases or how they feel generally about issues, especially abortion, which is growing into a key issue of Kavanaugh’s nomination since he’ll be replacing Kennedy, who was long viewed as a key swing vote protecting the Roe v. Wade legal precedent.

The public at large (57%) supported legal abortion in a 2017 Pew survey, saying it should be legal in all or most cases. Catholics were less supportive, but still a majority (53%) said at the time it should be legal.

And THAT’S what this is really all about — the liberal sacrament of abortion.

Really? Catholics? You're going to go there? That's the "news" story you went with today? Catholics? and you wonder why half of the country can't stand you?

Why do Socialists dominate the Democratic Party?

How about this: Why do liberal propagandists dominate CNN? 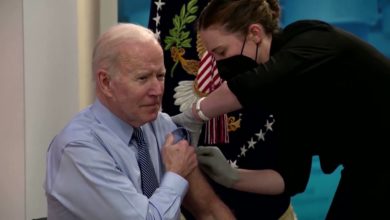 The Pivot Back To COVID! (Video)