You may or may not know this, but illegals often come ashore in small boats called panga boats. Such was the case at 7:00 a.m. on Thursday, when a small boat “washed up” on shore at Laguna Beach, California. Thirteen people ran from the boat, as residents called authorities. 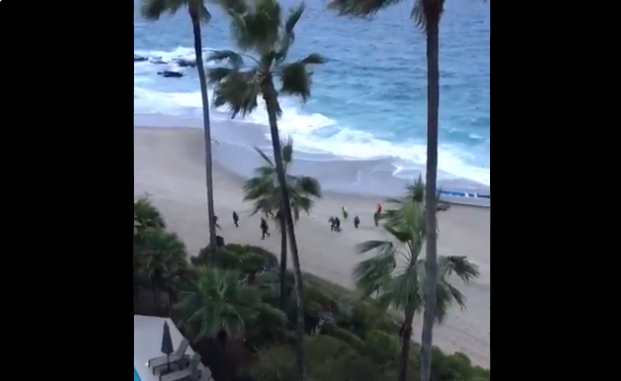 Seven people were detained including two human smugglers who had been waiting in vehicles to pick them up for a total of 9 people detained.

Panga boat: “The Panga is a type of modest-sized, open, outboard-powered, fishing boat common throughout much of the developing world, including Central America, the Caribbean, parts of Africa, the Middle East, and much of Asia.”

One local resident took a video of the landing:

Laguna Beach PD, Marine Safety, and @CBP are still in the area searching on foot for additional panga boat passengers after the obtained video shows 13 individuals fleeing from the boat. Currently, 7 are detained. pic.twitter.com/ETvZ2gAr4f

“They saw two men running for the cliffs. Officers were on scene in five minutes and immediately detained the two men who had ditched their life vests on the sand.” Border Patrol agent Vincent Pirro.

After the initial arrests, another five men were found hiding in the bushes. Four of the men are from Mexico, 3 are Chinese nationals. The two men found in the cars awaiting the migrants were charged with smuggling- one is a US citizen, the other is a “non-immigrant visa overstay.”

The panga can hold up to 15 passengers and a video taken by a resident appeared to show 13 men running from the boat. Border Patrol agents also seized nine gas cans and 13 life vests. There were no drugs on board, Pirro said.

“Given the amount of gas cans, it’s clear the boat came a long way,” Pirro said. “We see them leave from Ensenada a lot. They go around the Coronado Islands and north. They’ve gone as far as Half Moon Bay.”

…Panga transports are organized by criminal smuggling operations and single transports can cost $13,000 to $17,000, Pirro said. Therefore, he said, it is unlikely that Thursday’s landing is connected to the migrant caravan at the Tijuana border.

The other 6 illegals are reportedly still at large.