In what appears to be the usual overreaction to a misleading MSM story, Washington Democrats are calling for Conservative Washington Rep Matt Shea to step down. Why? Because of an article in the Guardian that made it sound like he was advocating violence against political activists in a message thread with others. Uh, not exactly.

“We also call on the State Republican Party to formally condemn and sanction Representative Shea. To do anything less is to condone and support the cancerous growth of extremism within your own ranks.”
Democratic Party Chair Tina Podlodowski in a letter reported by the Seattle Times

Matt Shea has been constantly bombarded with hate and threats against his family. He states he is a “Christian Conservative Constitutional Republican,” who believes in “less tax, less government, more freedom.” So they call him the “extremist.” Matt is a Christian and is not afraid to tell people that fact- which may be another reason for the uproar. Who are the intolerant ones? Here some examples: 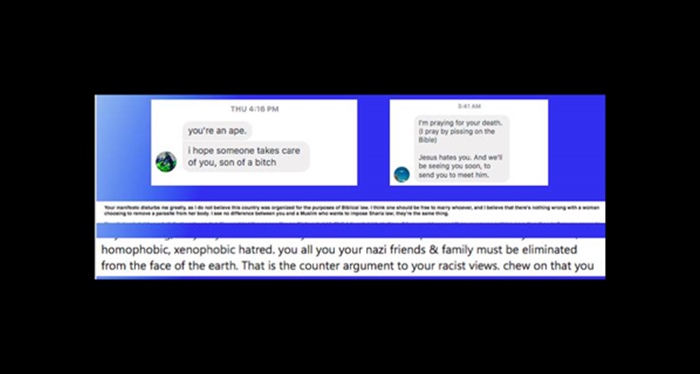 The hubub came after an article in the Guardian mislead people into thinking he was advocating violence and surveillance against political opponents, when in fact he was running background checks. Would you do that if you could? Especially if your family had been threatened? The man who wrote the article is reportedly an extremist himself. Liberals who hate Shea are hoping this is the final straw to get rid of him.

I will continue to fight to protect the Constitution, my family, and my community. I will not back down. I will not quit. I will not give in. Ever. To Governor Inslee, I do not take seriously an admonition against violence from someone who routinely fails to condemn Antifa acts of terrorism in this state and the barbaric rhetoric aimed at our President on the one hand while supporting the systematic murder of babies in the womb on the other. Instead, I call on the Governor to join me on the mission field in the future bringing peace and the Gospel of Jesus Christ to Ukraine, Argentina, and parts of Ethiopia as I did in November. I look forward to working with everyone else for lower taxes, less government, and more freedom.

Matt was elected in 2008, and lives in the Spokane Valley. Because of his tough stand for the Constitution, he has been called many names. He was present at the Bundy Ranch in 2014. He stands for the Second Amendment. But this Washington Rep is not backing down any time soon. If they push him out, it will be to the detriment of an already liberal state whose Democrats do not abide by the Constitution.