It’s been said that if it weren’t for double standards, liberals would have none at all.  That old saw seems to be appropriate in a story that exploded over the Internet after Twitter permanently suspended Breitbart Tech Editor Milo Yiannopoulos after he wrote a post critical of “Ghostbusters” and one of its leading actresses, Leslie Jones.

After he wrote the piece, Jones cried to the site’s moderators, and they promptly banned him for good.

In their email to Yiannopoulos, Twitter said he had been banned for “participating in or inciting targeted abuse of individuals.” And it’s true that Twitter’s terms of service do include a specific ban on abuse and targeted harassment. The question is – did Milo really break the rule?

Keep in mind that Twitter did nothing when Jerome Hudson, a black reporter for Breitbart News, was repeatedly called “coon” by a prominent rapper on the platform. It has also let abusive and racist tweets from Leslie Jones, the Ghostbusters actress who reported Milo to Twitter, stand.

So, either Twitter has a very high bar for what constitutes “abuse and harassment,” or it is simply enforcing its terms of service unevenly, giving some users a pass despite flagrant and shocking rule-breaking.

And that’s not the only time Twitter has exercised a double standard.

This morning, I heard from Jeanette Tye Runyon, a reader of this site who tells me she’s been targeted by a gang of radical left-wing Twitter trolls for over three years.

Here’s just one of the tweets she forwarded to me: 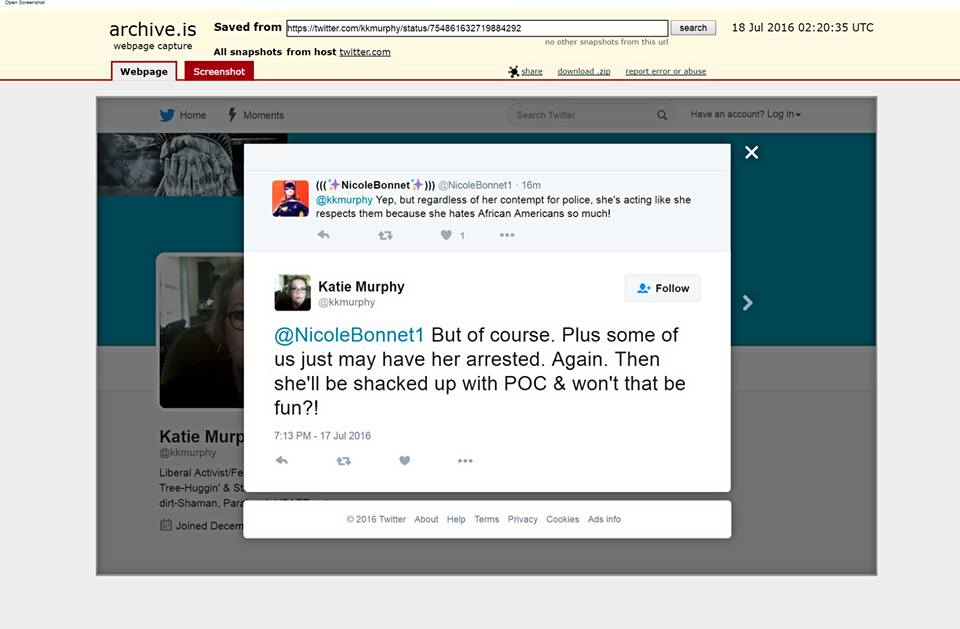 Arrested for what, exactly?  Breathing while conservative?

Robert Stacy McCain, who, by the way, was also suspended for surfing while conservative, provides a bit of background:

Our frequent commenter Jeanette Runyon is being sued in a Florida court by a man who is claiming “harassment,” etc., over a flame war that broke out in 2013 about the Kaitlyn Hunt case. Jeanette was one of a handful of people who followed the so-called “Free Kate” movement and exposed the extremism of those who made excuses for a tattoo-covered dildo-wielding dopehead lesbian hoodlum’s sexual abuse of a 14-year-old girl. The man who is suing Jeanette was one of the worst “Free Kate” fanatics who evidently believed either that (a) there should be no laws against statutory rape, or (b) it’s wrong to enforce the law against homosexual predators like Kate Hunt. Thomas Mix, the man who is suing Jeanette, called the parents of Kate Hunt’s 14-year-old victim “bigoted, disgusting people” who “used the laws to express their hatred and rage.”

McCain has considerably more on the subject, which is now a multi-part series.  And, there’s been an update here. If you want to see how left-wing Twitter trolls operate, this is a must-read.

The operative point here, however, is that Twitter has allowed this to go on for OVER. THREE.  LONG.  YEARS.

Twitter, Runyon told me, is “all about HATING correctly, they don’t care about the hate they care about WHO you hate. Twitter gang harassment is fine with them so long as the target is Twitter-approved.”

Yiannopoulos, Bokhari wrote, “has been permanently banned for little more than criticism, mild insults, and mockery. Meanwhile, Jerome Hudson’s abuser, who repeatedly called the black reporter a “coon,” is still on the platform. So is Leslie Jones, who, according to Twitter searches, has repeatedly engaged in racist rhetoric herself — as well the plain old abuse of calling her critics ‘b*tches,’ ‘a**holes’ and a range of other expletives.”