When Canadian truckers, only a few short weeks ago, launched a convoy aimed at resisting governmental COVID-19 vaccination mandates and raising the public’s awareness of the gradual but significant loss of their rights in that process, Prime Minister Justin Trudeau described it as a “small fringe minority.”

Small and fringe it may have been when the first handful of drivers put their tractors in gear, but it’s long since passed that stage, with confirmation it continues even today in multiple cities and it is being replicated over and over. It’s likely many thousands of truckers have joined.

Fox News describes how Ottawa police are fully occupied with demonstrations around the Canadian capital and they’ve moved to arresting protesters and seizing vehicles – even arresting people carrying fuel to the trucks – in an effort to suppress the messaging.

Over the weekend, Ottawa Mayor Jim Watson declared a state of emergency over the “Freedom Convoy” and the truckers say they are staying until the government rolls back vaccine – and mask – demands.

At one point, truckers who blocked a key route between Canada and the U.S. released a statement to makes sure people understood the fight: “While using emergency powers, our provincial and federal governments, with the assistance of health departments, have systematically taken away our rights and freedoms. We, the people, call on Jason Kenney and Justin Trudeau to immediately stop and retract all provincial and federal mandates and emergency health measures. We call on the premier to do the right thing. The people have spoken.”

As such campaigns always require funding, a GoFundMe account was set up, then killed by the company, only to suddenly be replaced by millions of dollars being sent through a Christian crowdfunding company called GiveSendGo.

By late Monday, more than $4.7 million had been assembled there.

The actions also were being replicated already. According to Fox Business, a convoy dubbed the “People’s Convoy” already had been launched in the United States.

Organizer Brian Brase said, “I can’t express enough that this is in no way is this a right wing issue or a left wing issue. This is not anti-vax. This is about your rights as a human being and then, of course, as an American, your constitutional rights.”

They were starting in California with plans to cross the nation and finish in Washington, D.C., next month.

Facebook immediately attacked by pulling down a page used for coordinating the effort, claiming it was working against a “violence-inducing conspiracy network.”

GoFundMe was facing a potential fraud investigation by the state of Florida after its attack on the convoy organizers, even though the same company promoted an occupation in 2020 when it shared a fundraiser for the Capitol Hill Occupied Protest in Seattle, which included a long list of criminal activities.

In the United States, a truck convoy already crossed Alaska to show support, in an event set up by Anchorage Assembly member Jamie Allard.

He told KTUU, “Without [truckers], we’re not getting our supply. We need to get our supplies here. People need to be recognized for everything we’re doing here in our city.”

50,000 trucks,joined by trucks from the US and 1.5 million people will demand an end to Covid discrimination and Trudeau’s tyrannical grip.

Canadian trucker part of the freedom convoy shares a video of supporters cheering them on in Langley, BC, Canada.

The truck convoy is making its way to Ottawa to partake in a protest next weekend against mandates. pic.twitter.com/O8ppz1ZB5T

And whether hundreds or thousands of vehicles and people eventually take part on the ongoing campaign, it’s way beyond “fringe.”

The Canadian Trucking Alliance estimates that roughly 15% of truckers in the country are not fully vaccinated, or about 16,000 truck drivers.

Trudeau, who after the campaign launched was shuttled off to a secret location, has said the truckers’ views are not “acceptable.”

A report at Redstate.com said, “Truckers are the lifeblood of not only Canada but also of the United States. They are making a statement that if they were ok to deliver all the goods we needed during the spring of 2020 and all of 2021 with no poke mandate to cross the border, there is no proof that says it is unsafe to do so now.” 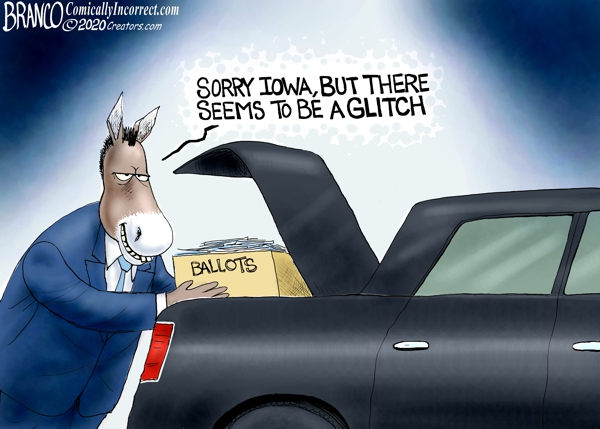 Cartoon of the Day: There’s an App For That