And the infamous WikiLeaks was the ringmaster of this circus, a role they happily took on when issuing this statement:

“Mr Edward Snowden, the American whistleblower who exposed evidence of a global surveillance regime conducted by US and UK intelligence agencies, has left Hong Kong legally. He is bound for a democratic nation via a safe route for the purposes of asylum, and is being escorted by diplomats and legal advisors from WikiLeaks”

“Mr Snowden requested that WikiLeaks use its legal expertise and experience to secure his safety. Once Mr. Snowden arrives at his final destination his request will be formally processed.”

NOW there’s a real trusted source of information and protection for you (gag).

And while we had asked Hong Kong to issue a provisional arrest warrant for Snowden, the Hong Kong Special Administrative Region said there were problems with the request.

Adding because Hong Kong didn’t have enough information,“there is no legal basis to restrict Mr. Snowden from leaving Hong Kong,” and so Snowden supposedly left the country.

Yeah right…how about he was let go because that was the plan all along…for what Snowden supposedly ‘exposed’ was made public long ago. 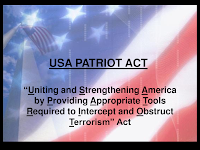 On October 4, 2001 in the aftermath of 9/11, President Bush authorized the NSA to track suspected terrorists by monitoring domestic communications without a warrant. However, the 1978 Foreign Intelligence Surveillance Act prohibited the government from eavesdropping inside the United States without first getting a warrant from the Foreign Intelligence Surveillance Court (known as the FISA court), so he had to work around this and thus the Patriot Act came into being…well intentions turned into a nightmare.

And on October 26, 2001, Bush signed the Patriot Act into law, thus expanded the government’s electronic surveillance powers. Bush said, “The existing law was written in the era of rotary telephones. This new law that I sign today will allow surveillance of all communications used by terrorists, including emails, the internet, and cellphones”.

Notice the word ‘terrorists’ NOT American citizens…NOT ‘We the People’.

And none of that was ever kept hidden from the public. In fact, in February 2002, The New York Times reported that the Information Awareness Office, a Pentagon agency, “is developing technologies to give federal officials instant access to vast new surveillance and information-analysis systems” and in November they reported on “a vast electronic dragnet” that could sweep up electronic and voice communications as well as financial data.

Fast forward to 2006 when USA Today reported that the NSA has diverted from Bush’s original intent, and had been tracking tens of millions of Americans’ phone calls using data provided by AT&T, Verizon, and BellSouth…data they claimed was needed if they had even an inkling of a reason to believe those ‘targeted’ were connected to foreign terrorists or terrorist organizations.

And major newspapers reported on other incidents like this over the years including a New York Times report back in May 2006 stating that immunity had been given to phone companies that had participated in the NSA’s warrantless wiretapping program, and in June 2009 the New York Times reported that private information was being disseminated by Facebook and Google among others.

The difference now from what Bush did then is that Barack HUSSEIN Obama is willfully and deliberately misapplying the intent of the Patriot Act to allow expanded domestic surveillance…spying…on people they know in NO way have connections to terrorists or terrorist organizations.

So Snowden did NOT report…expose… whistleblow…on anything that wasn’t already known and reported on, therefore, NO acts of treason have been committed and NO damage has been done to the United States by his supposed disclosures making this entire situation a ruse of the first degree…a ruse to divert us away from a truth that has been almost a year in coming…a diversion to keep us focused on a scandal that was NEVER a scandal to begin with.

And as events unfold, I now believe Snowden is working for ‘someone’…was sent to Hong Kong by ‘someone’…is being paid by ‘someone’…will get asylum (it seems like in Ecuador) with the help of ‘someone’…all to keep us baited and focused on leaks that are NOT leaks at all for all this information was always out there…one just had to search newspaper archives or the internet to find it.

And who is that ‘someone’…who has the major amount of money and power needed to pull this off…only one name comes to mind…the ‘puppet master’ himself…Mr. George Soros…for the ‘anointed one’ must be protected at all costs.

NO leaks NO scandal…yet someone is obviously being being protected…so what is behind all this…what would cause such a scandal to be concocted…the one and only scandal that must permanently be made to go away is…in a word…Benghazi.  Benghazi…the stuff of murder…cover-ups…aiding and abetting the enemy…orders to ‘stand down’… gun and weapons running…true treason committed by this president of the United States and his former secretary of state.

Benghazi…the Obama called ‘bump in the road’…the only thing that can actually take down this president and his administration, and they know it…and thus the NSA leaks were born so that the word ‘treason’ would be shouldered by another…willingly it seems…willingly and for a high price I would assume…someone who didn’t mind taking the heat off Barack HUSSEIN Obama and Hillary Clinton for as long as possible so that attention would be diverted away from the fact that on June 26th General Carter Ham, head of AFRICOM during the Benghazi attack, testifies before the House Armed Services Committee on the events of that night (in a closed hearing and there would only be one reason for it to be held behind closed doors), and I’m willing to bet that it won’t be pretty…and notice NOT a mention of it in the media.

Benghazi…the ghosts of four dead Americans taint everything this miserable excuse of a president and his administration do, concoct, and cover-up, but maybe now those ghosts will finally be able to Rest in Peace…and it might just take this phony scandal to do it.

Taking On School Board Tyrants – This Is How You Do It!
July 26th, 2021 Sons of Liberty Media