The knee on the neck

I personally do not agree with the knee on the neck, and it was said at first that this was how police were trained.  Upon further investigation, that would seem to be untrue.

“Mercil said officers are trained in how to get control of a suspect by using their arms on the side of a person’s neck to slow blood flow to the brain. He said officers are not taught to use their legs or knees, though a knee on the neck can happen depending on a person’s resistance.”

Floyd was resisting arrest, he also had a history with police, and he had drugs in his system.  All is not black and white, as some would have us believe.

What the autopsy revealed

The autopsy that the prosecution referred to as conclusive evidence of Chauvin’s guilt is anything but conclusive.  The “facts” as stated by the various “experts” are far from even being in agreement as to cause of death.  Dr. Andrew Baker, who is the chief medical examiner for Hennepin County gave conflicting testimony on what the cause of death was.  The former chief medical examiner for Hennepin County, Dr. Lindsey Thomas (who trained Dr. Baker) gave yet another opinion.

“Floyd’s existing and underlying heart disease was a contributing cause of his death; it was evidenced by a heart that ‘weighed more than it should’ and coronary arteries that were significantly narrowed.

‘The law enforcement subdual and neck compression is just more than Mr. Floyd could take by virtue of his heart conditions,’ Baker said.”

Baker went on to say however that he found “no real damage to the brain, lungs or heart.”  He also stated that there was “severe narrowing of coronary arteries, significant enough to cause sudden death in a person.”  Then he went on to say Floyd was generally healthy.  Seriously???

According to Dr. Baker’s autopsy report, heart disease, hypertension (high blood pressure), and drugs contributed to Floyd’s death.  Baker also thought Chauvin’s knee was on Floyd’s back, not on the neck.

Then there is this admission from the good doctor:

“Also, Baker told jurors that if Floyd had been found dead in his locked residence with no evidence of trauma, he would’ve concluded Floyd died of an overdose.”

Dr. Baker stated that Floyd’s breathing did not appear to be impaired because of Chauvin’s knee.  Dr. Thomas stated that (in direct opposition to Baker’s “facts”) that Floyd died due to asphyxia as a result of the officer(s) actions in restraining him.

George Floyd’s family had another autopsy performed, and the findings of that autopsy agree with Thomas’s findings, asphyxiation due to “sustained pressure.”

Thomas also said that Floyd did not have a heart attack or stroke.  Baker said Floyd died from cardiopulmonary arrest, similar to but not the same as a heart attack.  Ether way, the heart stops, and you are dead unless swiftly treated.

“If Floyd had died at home, with no confrontation with police, Thomas said she would probably have concluded that Floyd died of heart disease.

Asked if, in another hypothetical scenario where Floyd was found dead at home, she would conclude Floyd died of an overdose, Thomas said she ‘could consider’ it.”

“Dr [sic] David Fowler, is a pathologist who has testified in numerous high-profile police use-of-force cases, testified that Floyd died of a sudden heart rhythm disturbance as a result of his heart disease.

He also said the fentanyl and methamphetamine in Floyd’s system were contributing factors in his death.”

Multiple experts with differing opinions.  Who is right?  And what about exactly where Chauvin’s knee was?  All of these differing facts, and opinions (there are more opinions here than facts) contribute to what actually happened.  It also obviously contributes to a reasonable jury’s decision.  Except that said jury was likely influenced by the threat of nation-wide mayhem unless Chauvin was convicted.

Minneapolis police have stated that there is no training whereby officers are told to use neck restraint.  Yet the Minneapolis PD’s own training officer talked about how it could be used.  Well, which way is it?  Neck restraint is not used or taught, or it is used in some situations with guidelines, they can’t have it both ways.  The Minneapolis Chief of Police, Medaria Arradondo said Chauvin also violated the department’s policy regarding neck restraints by kneeling on Floyd’s neck. “A conscious neck restraint by policy mentions light to moderate pressure,” he said.  Again, which way is it, there is a policy, or there isn’t?

The prosecution is required to prove their case beyond the shadow of a doubt.  There seems to be plenty of doubt here.  There is significant disagreement on exactly what all happened, how it happened, and exactly what caused the death of Mr. Floyd.

With all of the facts being interpreted in a different manner by the “experts,” are we seeing a mere difference in professional opinion, or was this official misconduct because “opinions” have been swayed to affect a “desired” outcome?

Did Derek Chauvin receive a fair trial?  I think many have grave doubts about that.  I in no way am trying to suggest here that Chauvin did nothing wrong, but that isn’t what this whole debacle is about.  Did Chauvin in fact receive the fair trial he was entitled to, or was the result (decision) of this trial a forgone conclusion?

Media and other influence

Let no one forget for even a moment the fact that the media has been practically screaming for Derek Chauvin’s blood.  It is painfully obvious that many public figures as well as the Leftist media had already convicted Chauvin before the trial even began.  Chauvin is guilty, move on, nothing else to see here.

Congresswoman Big Mouth, AKA Maxine Waters also called for a conviction, yet she took it even a step further going so far as to potentially incite violence.

“Waters had told a crowd of demonstrators gathered in Brooklyn Center, Minnesota: ‘We’re looking for a guilty verdict. And we’re looking to see if all of this [inaudible] that took place and has been taking place after they saw what happened to George Floyd.

This came from all places a Leftist publication.  I want you to note something here, look what MSNBC had to say about this in the form of the article’s title and subtitle, it’s pretty telling, and for once – honest.

Dismissing Maxine Waters’ comments as trivial was not just a lie — it was a profound disservice. (subtitle)

The trial’s judge dismissed a request for mistrial because of this, but read what the judge had to say about Waters:

“Judge Peter Cahill denied the request but said that Waters’ comments were ‘abhorrent’ and that she may have handed the defense a lifeline anyway.

‘I’ll give you that Congresswoman Waters may have given you something on appeal that may result in this whole trial being overturned,’ Cahill said as arguments concluded Monday and the jury began deliberations.”

Kamala Harris said that a conviction would not “heal the pain” of systematic racism.  Biden echoed this same sentiment when he rushed to the cameras after Chauvin’s conviction.  Before Chauvin was convicted, Biden “prayed” for his conviction.  No president or any other elected official has any business saying this.

Was a conviction “enough” for Black Lives Matter?  No, actually it wasn’t.  Their next target?  The other officers involved in the Floyd shooting, as well as the people who burned stuff down, after all, they should not suffer the penalty for their crime.  Criminal penalties are for white people only.

Here is what some BLM supporters had to say:

“…We’re not gonna let these pigs in these buildings have any more control over our lives today. That s**t ends today.”

“…The only reason once again, that we got this conviction, is because we showed up. And if we don’t keep showing up, and if we don’t change laws, and we don’t attack this system, from every single f***ing angle we can, we will be here again.”

“We’re not, we’re never gonna be satisfied,” the BLM supporter said. “Black Lives Matter isn’t a trend. It’s a movement. Black Lives Matter forever, okay? So, we’re not gonna stop just because we’ve got one conviction. We’re happy with the conviction, but we’re gonna keep going. … This is a black genocide. This is more than one case. We’re not satisfied.”

“…the power that we have is immeasurable…this movement has made it’s way to your front door and we are no longer knocking…no justice (crowd) no peace…(crowd) BURN IT DOWN!”

“I cannot be anymore peaceful.. this movement has made it’s way to your front door and we are no longer knocking..”

BLM CHANTS: “BURN IT DOWN”

I think BLM’s intentions are clear from this video out of Minneapolis.

Watch the video, it is an eye opener and typical of BLM.  Do as we say or else.

Conclusion – was it a fair trial?

Given the evidence presented above, NO, I don’t think Derek Chauvin had even a remote possibility of a fair trial.  Many cities had businesses boarded up in anticipation of violence all across the U.S.  Black Lives Matter made threats that the verdict had better be the “right” verdict:

Under the headline America will riot if Derek Chauvin isn’t convicted for killing George Floyd, King wrote: ‘Yes, Dr. (Martin Luther) King said that riots ‘are the language of the unheard,’ but hear me now – if Derek Chauvin is not convicted of some degree – first, second or third – of murder, if he is not held accountable in the court of law, a reckoning is going to befall this country one way or another. And it should.’”

Greg Gutfield of Fox News stated after the verdict that he was glad Chauvin was convicted.  His reasoning leaves a lot to be desired.

But this attitude is precisely the attitude that has been and is prevailing nation-wide.  Did jurors base their decisions on the influence and threats of Black Lives Matter and others who vocalized their support for them, and the George Floyd family?  It sure seems like it from where I’m sitting.

In closing, listen to Tucker Carlson’s take on this; he hit the nail right on the head.  Oh, and when you hear what Nancy Pelosi said, be sure to have your barf bag ready. 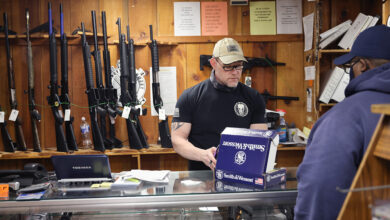