A Planned Parenthood Action executive in Arizona is calling for violence after the U.S. Supreme Court allowed to take effect a Texas law banning many abortions.

“Be ready to break some s—,” Chris Love wrote on social media following the 5-4 ruling overnight Wednesday night by the court that allowed Texas’ new law to take effect.

It is novel in that it allows any Texas resident to sue for $10,000 damages from anyone who provides or aids in the provision of an abortion.

The abortion industry had wanted liberals on the Supreme Court to suspend the law while they fight it in court, but the pro-abortion segment of the court could come up with only four votes, and the effort failed.

A key dispute is the fact that the state and its officials are not charged with enforcing the law, its citizens are, foiling the usual abortion industry move of suing a state or its officials.

Love, of Planned Parenthood Action in Arizona, said on social media, “If you went to bed early last night, you’re waking up to news that SCOTUS did not to (sic) intervene in Texas, so SB8, a bill that bans abortion at 6 weeks, is now law. If you’re like me, your timelines is (sic) awash with folks being all varieties of upset as Roe is essentially done…”

Love continued, “I mean, what exactly did you all expect? You’re devastated, but you consistently ignored every single sign. I’ll write something coherent in the morning, but just know that fighting back doesn’t mean pussy hats or petitions. Be ready to break some s—.”

The Gateway Pundit, in a commentary, described Love’s demand for action as a call “for riots.”

A statement at EZAZ.org, a “strong communities” outreach, said, “The call for rioting comes at a suspicious time as Biden’s DOJ is pursuing a punitive investigation against the Phoenix police for stopping riots, and violent crime continues to surge.”

The site pointed out that state Rep. Daniel Hernandez, a Democrat, “liked” the comment, and Rep. Diego Rodriguez, another Democrat, retweeted them.

The first sign was Dems doing absolutely nothing to force through a SCOTUS appointment in Obama's last year. They let Republicans run roughshod and hold up the Garland nomination. BTW, the choice of Garland was a strategy to appease Rs. The thing is, it didn't work. Never does.

Love continued, “I’m not upset. I’ve been numb to this for a while. We knew this was going to happen. Black women told you think (sic) would happen. THIS black woman told you it was coming … and many of you rolled your eyes. But the die was cast a while ago.”

She blamed the Democrats for “doing absolutely nothing to force through a SCOTUS appointment in Obama’s last year. They let Republicans run roughshod and hold up the [Merrick] Garland nomination.”

Garland, then a judge, now is a pro-abortion attorney general for Joe Biden.

The fact that the Republicans simply delayed Obama’s nomination of Garland to the Supreme Court meant President Trump was able to nominate, successfully, three justices: Brett Kavanaugh, Neil Gorsuch and Amy Coney Barrett, who all were in the majority in refusing to interfere with Texas’ law.

Love’s diatribe continued, “White people voted for Trump. Those of you didn’t didn’t (sic) were shocked! Why? Again, many people, especially black women, TOLD YOU IT COULD HAPPEN. And you shrugged and wore your white suits to the polls instead of making sure ‘you people’ knew what was at stake.”

She said then Trump appointed conservatives to the courts.

“Now, Dems are back in the majority. What have they done? Exactly NOTHING,” she said. 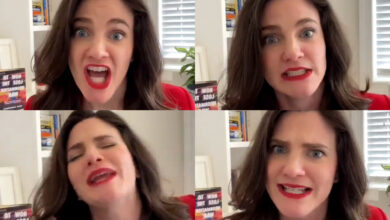