It didn’t take long for the Left to react badly to President Donald Trump’s decision to pull out of the Paris climate agreement, and even his predecessor, Barack Obama, jumped at the chance to remain relevant, accusing Trump of “rejecting the future.”

The Economist observed that, “the president’s decision to withdraw from the accord is similarly unconscionable and fatuous. A repudiation of his predecessor’s main climate policy, it was opposed by most of Mr. Trump’s advisers, most large American firms and two-thirds of Americans. Mr. Trump has dealt a severe blow to America’s interests and standing.”

California billionaire climate activist Tom Steyer issued a statement in which he said the president is “a traitor if he makes good on his promise and exits the Paris climate change agreement.” A lengthy statement appeared on Twitter: 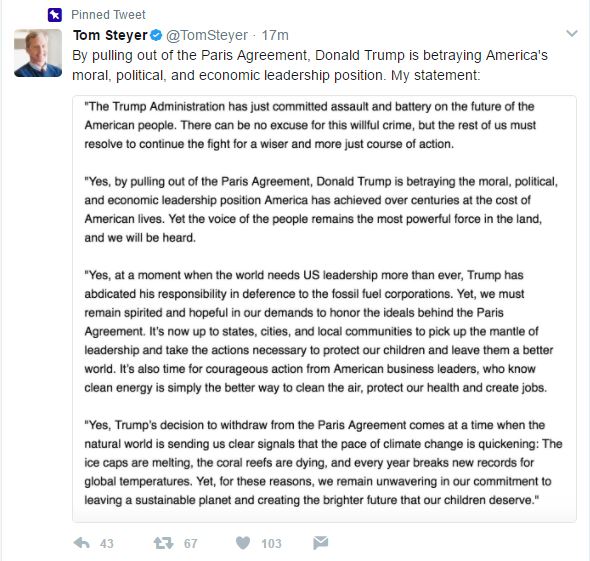 But Trump does have some support. Also writing at Fox News, Erick Erickson defended the president’s decision, noting, “It is not very brave these days to stand up and denounce President Trump. Hollywood and the media will turn you into a hero. But it is a brave thing to stand up to the zeitgeist and culture of fear and bullying the left and media have instilled on the issue of climate change. But President Trump is doing just that. He is defying the left, the media, his children, and many world leaders.”

According to a report in the Seattle Times, “By abandoning the world’s chief effort to slow the tide of planetary warming, Trump was fulfilling a top campaign pledge. But he was also breaking from many of America’s staunches allies, who have expressed alarm about the decision.

“But Trump said the agreement disadvantaged the U.S. ‘to the exclusive benefit of other countries,’ leaving American businesses and taxpayers to absorb the cost,” the story explained.

Trump indicated that he would be willing to negotiate a new agreement, but it did not appear to be a priority.