Broney’s Alumni Grill in Athens, Ohio lost one of its main vendors over a facebook posting of a chalkboard message placed in their establishment. The Ohio bar had this message written on a Rhinegeist chalkboard:

“If you’re looking for a safe space this ain’t it Cupcake.” 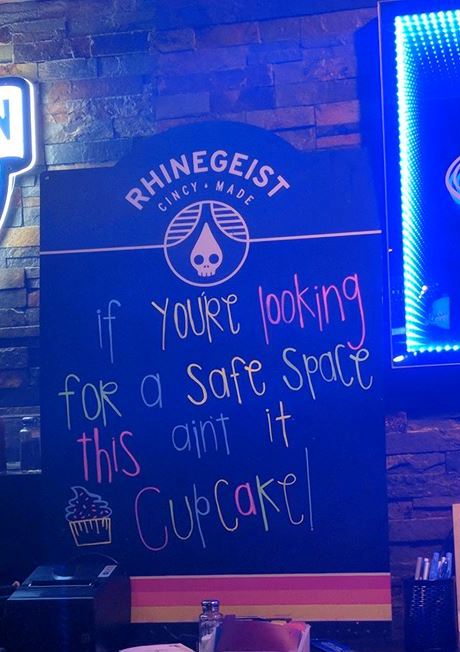 According to Fox, Rhinegeist announced over the weekend on Facebook that they will no longer do business with Broney’s.

“At Rhinegeist, we are committed to our people and our community. Today, we were made aware of an offensive message written on a Rhinegeist-branded chalkboard at Broney’s Alumni Grill in Athens, Ohio. The content of the message was ignorant, disrespectful, and wholly inconsistent with our values as a company. As a result, we have ended our relationship with this establishment and will not do business with them in the future.”

That was a little much for the vendor to do. They didn’t bother to do any investigation at all.

Hold the carnage, folks. First the message was removed the same day it was put up by the owner. He says he doesn’t yet know who put it there. Second, it’s true. Bars are NOT safe spaces, in fact they can be down right dangerous depending upon the neighborhood and the clientele. That goes for both men and women.

And last, the owner should have stepped up and told the “cupcakes” to take a flying leap if they can’t take a joke. But, as a business owner, he probably panicked at the publicity and scrambled to save himself.

As the owner I cannot apologize enough for the offensive sign that was written on the chalkboard Friday night. It does not reflect my personal feelings or the image I want my establishment to reflect. As soon… https://t.co/wA9XvyHWau

“As the owner I cannot apologize enough for the offensive sign that was written on the chalkboard Friday night. It does not reflect my personal feelings or the image I want my establishment to reflect. As soon as I found out about the sign it was taken down immediately and I am in the process of determining who wrote it and put it up. Again, I apologize to all that were offended and will work to make certain an incident as offensive as this never occurs again.” Owner, Broney’s Alumni Grill

Here are a few responses of people on Facebook:

“Lol! Did people even think for one second before saying they are offended? The entire point of the sign is poking fun at people who are easily offended!
“Safe spaces” are areas where freedom of speech is not allowed, where everyone must be PC to avoid offending anyone, by saying something non-PC, such as using the pronoun “him”.

It seems to me a lot of the response proved the point that the sign was making.

To the owner who “can’t apologize enough” – did you misplace your back bone?

To those offended that free speech exists, that not every place is a sissified “safe space” – boys have Y chromosomes! That’s different from girls. I know THAT will freak you out.”

“It wasn’t even offensive!!!! Why are you being forced to apologize for a sign!!! It’s a bar, I’m sure some drunk people said way more offensive things than that sign did!!!”

A woman named Rachel wrote that “rapey jokes are never funny”…what the h.e. double toothpicks is she talking about? Many people claimed that the bar was now unsafe for women and gays and the owner should send all his employees to programs that teach them how to be sensitive to others.

It’s. A. Bar. Guaranteed people say worse than that sign every night. But this commenter named Michael got it right:

“Life doesn’t come with a guarantee that you won’t be offended or that you will always feel safe and protected. In a country where free speech is a right, or at least used to be, there is always a risk of being offended. Maybe you can learn to toughen up a little and accept that others are not going to give up their free speech right to meet the ever changing level of how offended you are today. Stop trying so hard to be offended by everything and stop trying to portray and label everyone whose opinion differs from yours as being racist or misogynistic when they have done nothing of the sort to deserve such labels. Grow up and learn what every other generation has learned before you, there are no guarantees and defending free speech is more important than defending your feelings. Learn to control your feelings and stop being so dependent on outrage to get you the attention you so desperately crave. It isn’t the rest of our faults you’re thin skinned and so easily offended you can barely exist let alone partake in a rational discussion about why it’s not ok for you to try and censor everyone that doesn’t agree with you. Your parents lied to you, you aren’t special and you have to learn to live with the fact that everyone else has just as much a right to express themselves as you do, even if you have to feel offended by it.”