Serious stuff here folks as Benjamin Netanyahu warned Obama, warned the P5+1, and warned John ‘Swiftboat’ Kerry before any of them agreed to that ridiculous deal last month in Geneva… warned them that Iran cannot ever be trusted…but did they listen…in a word…NO.

And now Iran’s hard-line lawmakers…lawmakers who oppose the deal reached in Geneva and who are being fueled on by their war-mongering mullahs in response to a planned but NOT yet passed or implemented legislation by US Senators to actually add additional sanctions…have drafted a bill to increase the country’s level of uranium enrichment to 60%…a level that can produce bomb-grade material in a very short period of time. This means Iran is in direct violation of the accords they just agreed to…like they ever intended to honor them in the first place.

But it goes much further than just the drafting of a bill for 100 of the 290 members of Iran’s Majlis (the Iranian parliament) have already signed said draft and are now demanding that President Hasan Rouhani approve uranium enrichment to 60% by claiming it’s necessary and needed to fuel Iran’s nuclear submarines and “other facilities in case the western anti-Iran sanctions are intensified.”

And with those words you all know Iran’s true bottom line…and peaceful nuclear use does NOT fit into that equation…something so obvious to so many but something Barack HUSSEIN Obama and his cohort choose to ignore.

And it gets ever better for if the final draft is indeed passed, as per Iranian law their government would then be obligated to put the Arak heavy water reactor into operation and enrich the uranium to that 60% level if even one sanction is imposed on them and if they deem that Iran’s nuclear rights continue to be ignored.

So to counter Iran’s newest maneuver our Senators…who already have support from a quarter of the Senate…have drafted a bill of their own that would impose even tougher sanctions on Iran if they refuse to dismantle their nuclear program in full after the end of the six-month period agreed to in the accords.

And so the tit-for-tat game begins, but as expected with Obama’s allegiances always going to America’s and Israel’s enemies, he has already said he will use his veto power against any legislation that would impose new sanctions of any kind on Iran even though he knows very well that continuing the sanctions would probably have Iran’s economy totally collapsing within about two years.

And you know Netanyahu can’t be too happy with this latest development courtesy of our ever-loving backstabbing president.

So it seems Iran is now ripping a page right out of Kim Jun-un’s North Korean playbook…a page of who cares what we signed or agreed to…can you say taqiyya…by their showing the world that their nuclear program will indeed go forward as they thumb their nose at those out to stop them. And it’s oh so obvious that Iran is trying to position itself to win it all…as America becomes in danger of losing it all as our Congress sits back and does NOTHING for the next six months.

And the statistics of that positioning are quite disturbing as Iran currently has 19,000 centrifuges that we know of, and with us now finding out that even more centrifuges…the ‘next generation’ of centrifuges Iran calls them…all with a higher enrichment capacity that are now being readied to go online, makes it in-your-face obvious that those centrifuges are NOT intended for peaceful purposes NO matter how many times and how loud Iran screams that they are.

And even more disturbing is that these new centrifuges were specifically built to enrich uranium to that much needed and wanted 60% pure uranium 235 level…an enrichment number 12 times the cap number of 5% that they ‘supposedly’ agreed to in Geneva. And as an added bonus these new centrifuges would enable Iran to easily convert their current stockpiles of enriched fissile material to weapons-grade uranium in an extremely short period of time…a major concern for Israel but again Barack HUSSEIN Obama remains mum as Netanyahu wisely raises the red flag.

And so today, Iran and the P5+1 will hold a new round of ‘dog and pony show’ talks on the actual implementing of the interim accord…an accord that actually has already been violated by Iran. And now Iran has decided that they want to talk separately…to meet one-on-one with each of the P5+1 representatives to ‘supposedly’ work out any remaining problems and difficulties with the said already violated accord. 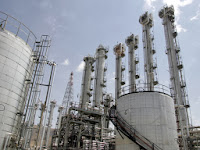 But Iran does NOT need to meet separately with anyone about anything. What Iran needs to do is honor the agreement they signed instead of playing games for we all know that Iran’s true goal in furthering their nuclear agenda to first wipe Israel off the map and then aim their weapons at what they perceive to be the ‘Great Satan’… the United States of America.

And lest we forget that if Iran succeeds in becoming a nuclear nation the entire Middle East could very well become a Sunni vs. Shi’ite powder keg and battleground in a nuclear arms race that is a danger to all Western nations…is a danger to the entire world.

So come on BiBi…the civilized nations of the world are looking to you…whether they outwardly admit it or NOT…to do what we all know needs to be done.

President Trump Speaks About His Future Plans During Lunch At One of His Golf Clubs
January 22nd, 2021 Flag And Cross