The Community Relations Service (CRS), The Daily Caller is reporting today, supported community organizers staging protects against George Zimmerman in Sanford, Florida, including protests organized by racial issues activist Al Sharpton. CRS, a division of the Department of Justice (DOJ), was deployed to Sanford to aide and support organizers of protests against Zimmerman, who is accused of second degree murder in the Trayvon Martin shooting.


The activities of CRS, supporting the protests, are reporting in DOJ documents obtained by Judicial Watch from the government. The Daily Caller story reports, “CRS spent $674.14 between March 25-27 related to having been “deployed to Sanford, FL, to work marches, demonstrations, and rallies related to the shooting and death of an African-American teen by a neighborhood watch captain. CRS spent another $1,142.84 for the same purpose between March 25-28. CRS spent $892.55 “to provide support for protest deployment in Florida” between March 30-April 1, and $751.60 “to provide technical assistance to the City of Sanford, event organizers, and law enforcement agencies for the march and rally on March 31.”

Al Sharpton organized spoke at a March 31 rally titled “The March for Trayvon Martin” speaking in favor of prosecution of George Zimmerman. At this event and others, Sharpton and other protest leaders called on the state to prosecute Zimmerman for the Trayvon Martin shooting. Initially, the Sanford Police Department had declined to book Zimmerman for any criminal charges in the incident.

“Congratulations to our partners, Thomas Battles, Regional Director, and Mildred De Robles, Miami-Dade Coordinator and their co-workers at the U.S. Department of Justice Community Relations Service for their outstanding and ongoing efforts to reduce tensions and build bridges of understanding and respect in Sanford, Florida,” wrote Amy Carswell, Miami-Dade County Community Relations Board Program Officer, in an April 16 email reported by the Daily Caller.

Rush Limbaugh discussed the activities of the CRS in aiding the protests on his radio program today. Limbaugh was skeptical how supporting such protests were consistent with the goal of reducing racial tensions. Limbaugh said he believed the opposite was the intent of the effort, that the Obama Administration wanted to fan racial divisions, he said. 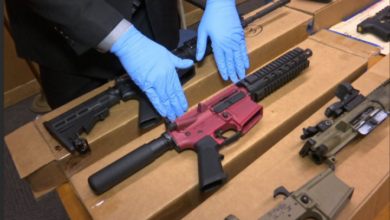 Biden Ghost Gun Rule to be Released; Nominate Another Anti-gun Person for the ATF