So much for the idea of separation of church and state.  On Sunday, Maxine Waters, the California Democrat obsessed with impeachment and conspiracy theories involving Russia, gave a wild political sermon at the First African Methodist Episcopal Church in Los Angeles, telling the congregation that she was sent by God to take down Donald Trump.

Along the way, she spread her usual pack of conspiracy theories and falsehoods.

“We never dreamed we’d have someone in the White House who was divisive, who could not tell the truth, and who was intent on not making America great again, but taking America down!” she declared.

According to The Daily Wire:

“I will not sit quietly and allow the President of the United States, or anybody else, to undo all that’s been done,” she said, a theme which she repeated a few times in her speech. “And ladies and gentlemen, I am in this fight!” she announced, to strong applause. She “will not shut up,” she promised, and will not cower to the president’s and his allies’ intimidation.

Top on Waters’ list of “ruthless” Trump’s supposedly seditious acts is his supposed collusion with Russia.

“Russia elected this president!” Waters declared. Trump meeting privately with Vladimir Putin last week is yet more evidence of the leaders’ schemes to bring America down, she suggested. Though the private meeting between the two leaders is exactly like every other private meeting between heads of state, she accused Trump of trying to hide something. “That’s not right!” she said.

She ended her stem-winder with a claim that the Almighty has sent her on a mission against Trump, the American Mirror said.

“You’ve gotta know that I’m here to do the work that I was sent to do, and as pastor said to me when I came in this morning, when God sends you to do something, you just do it,” she said.

“So I have a message I’m going back to Washington tomorrow morning, I’m going to tell them pastor told me to come here and just do it!”

According to Kyle Olson, “the pastor then embraced Waters amid wild applause.”

Here’s video of her speech: 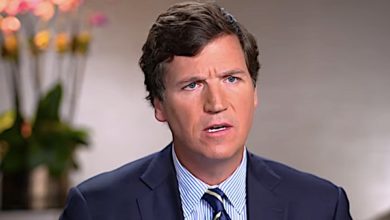