(Natural News) A left-wing pediatrician and professor who serves as a medical “expert” for CNN has openly called on the federal government to completely torch the First Amendment and “go after” any right-leaning or independent media outlet reporting truths about the sometimes dangerous and deadly COVID-19 vaccines, calling such publications “anti-science.”

“CNN’s favorite bow-tie-wearing expert, Peter Hotez, is the kind of medical professional CNN liked; the kind who inserts politics into everything and jumps at the chance to attack Republicans,” Newsbusters reported last week.

First and foremost, let’s review: This hack is a pediatrician and professor, not an immunology expert and certainly not a vaccine researcher, but again, as Newsbusters notes, those are not the credentials CNN is interested in; he must be an anti-conservative and a hack pundit first and foremost, so he fits the bill.

Hosts Alisyn Camerota and Victor Blackwell were talking about COVID boosters, which were not recommended for anyone under 65 by an advisory board for the FDA (and whose recommendation has now been tossed aside by another left-wing political hack physician, CDC Director Rochelle Walensky).

At one point, Blackwell asked Hotez to explain a very political tweet of his, in which the pediatrician claimed with zero evidence that “anti-science aggression” had “murdered 100,000 Americans” since April and the country had “refused…to implement measures to halt it.” That led the CNN host to ask, “You’re calling out, I assume, politicians here. And what do you want them to do?”

This crackpot went on to say that those deaths are the fault of conservatives, and if their “anti-science aggression” wasn’t curtailed, the number of coronavirus deaths would double by year’s end.

“The point is, we’ve built in a lot of infrastructures to combat terrorism, cyber-attacks, nuclear proliferation. Anti-science is killing more Americans than all of those things combined. We need to really take measures and it goes beyond just calling out Facebook,” he began before going on to reference a far-left nonprofit group called The Center for Countering Digital Hate.

The group’s website indicated they are a hate group that specifically targets conservative sites and praises abortion, Democrat vote-cheating laws, and a host of other left-wing causes.

So naturally the ‘enemies’ are conservatives in media and in Congress for this guy.

Never mind that the country’s ‘chief scientist,’ Anthony Fauci, has been wrong about COVID from the beginning and has lied repeatedly about various aspects of it.

“We need to bring in the State Department. The Justice Department. Homeland Security. This goes way beyond HHS. And so far, we’ve not seen measures to combat that,” he said.

“So, not only should the government stop Fox News (Hotez’s Twitter timeline is filled with anti-Fox tweets) he suggests CNN viewers go to a radically left website to find out who was dangerous. The interview ended after this, with Camerota thanking him,” Newsbusters noted further.

For all the accusations against Donald Trump for allegedly being a tyrant — he wasn’t; he was the most constitutional president we’ve had since Reagan — it’s the left who are the authoritarians, as Hotez the crackpot pediatrician proves. 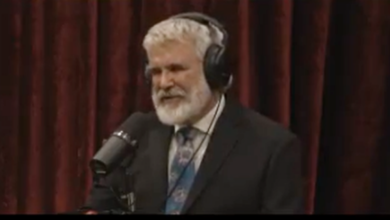