(Natural News) It’s a well-established fact, especially following the chaotic 2020 elections, that Democrats have to cheat in order to win elections.

They know that their policies are not universally popular, and while they do dominate in several regions of the country, if you were to poll every single American adult about their woke, tax-heavy, regulation-heavy, authoritarian policies, the vast majority would be opposed to most of them.

The Trump presidency was the biggest threat to the Democrat/Marxist deep state to come along in a century. Donald Trump’s personality was strong; he was confident; he was sure in what he wanted to do for the country; he was tested in his life, becoming hugely successful. And more than anything, he was an ‘America First’ president, the quality the Marxist deep state hated the most.

So they got together around 2018 and plotted out a strategy to deny him a well-earned second term and in the process, deny Americans the opportunity to live in a prosperous, safe, powerful country either feared or respected the world over as the globe’s preeminent power and financial center.

The result was a stolen election and the installation of a hapless, helpless, mind-addled man as ‘president,’ and a declining country.

But the Democrats weren’t through. In order to retain control over the most populous, wealthy and powerful state — California — it looks like they’re going to cheat again.

Eyebrows were raised on Monday following news that a man was arrested in California in possession of more than 300 ballots in the midst of an election to recall Democratic Gov. Gavin Newsom.

Reports said that officers were called around 10:45 p.m. Aug. 16 to a quick stop in Torrence, Calif., on reports that a man was asleep inside a vehicle in the parking lot.

According to NBC Los Angeles, officers found the man and also discovered a loaded firearm in his car along with drugs, driver’s licenses, and credit cards that belonged to other people. In addition, they discovered a box of mail in the back seat of the vehicle containing hundreds of unopened and unmarked ballots, the department said in a statement.

In addition to being arrested for possession of a firearm and narcotics, Torrence, Calif., police also charged the man with potentially tampering with recall ballots.

The Torrance Police Department’s Special Investigations Division, the U.S. Postal Service, and the Public Integrity Unit of the Los Angeles County District Attorney’s Office are all investigating “how the election ballots ended up in the suspect’s vehicle and what their intent was in having them,” according to a police department statement.

“Our detectives are doing their investigation, and we just need to figure how these ballots ended up in his car and what was his intent with these ballots,” Torrence Polie Department Sgt. Mark Ponegalek said. “We are not ruling out anything. It could be mail theft. It could be election fraud.

“So far, it appears they were en route to the actual voters,” he added.

The department said anyone who didn’t get a ballot will be sent a new one; California is a ‘universal mail-in ballot’ state and it also permits “ballot harvesting” — the collection of ballots by third parties, making the entire system ripe for massive fraud (and perpetual Democrat control, of course).

This comes amid an extremely tight election to recall an increasingly unpopular Democratic governor, Gavin Newsom — so go figure.

But once again, we are alerted to a classic example of blue-state election chicanery after we’ve all been told for months since the November elections that “vote fraud is rare” and “vote fraud doesn’t happen on a grand scale.”

When Democrats say things like that, it’s generally a safe bet to presume the opposite is true.

Here’s another thought: If one person in California had 300 mail-in ballots, how many more others like him are in the state and how many ballots do they have apiece? 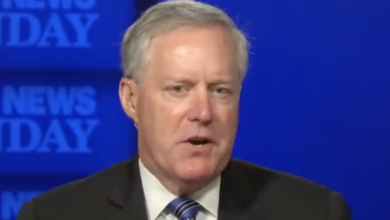