Earlier Thursday, we reported the story of a Canadian professor critical of politically-correct gender-neutral pronouns who was locked out of his Google/YouTube account.  Paul Joseph Watson responded to the professor’s tweet with a statement saying, “the purge begins.”  This prompted Dan Arel, a writer whose articles appear at the Huffington Post, to issue a tweet suggesting the actual purge would be much more violent than a ban from social media.

“Oh Paul, when the left begins its purge, it will be much different than this,” Arel said, clearly implying a violent, bloody purge of conservatives.

Watson responded, asking Arel to clarify his statement and asking if it was a threat of violence.

He also deleted his initial tweet, which Watson captured for posterity:

Please tell me what you mean, Dan. pic.twitter.com/mWA9FkXo1R

Translation: All conservatives are Nazis.

Arel then backtracked somewhat, claiming that what he really meant was that liberals would ban all conservatives from the Internet:

So much for freedom, free speech and “tolerance.”

Really Dan? Hiding? You mean like you hid your tweet by deleting it and think the Internet forgets?

Arel then made his Twitter feed private for a while, acting like the typical schoolyard bully who runs when he is finally confronted.

Not to be outdone, the self-proclaimed “activist” whose Twitter banner image is a picture of a group of protesters holding a banner that reads “this is war,” then accused gay Jewish commentator Dave Rubin of being “Nazi f**king trash” because he once hosted conservative commentator Lauren Southern.

1. I grew up around Holocaust survivors.
2. Nazi's tried to exterminate the Jews.
3. I'm Jewish.
4. You are mentally ill. Get help.

Watson and others may have some justification for thinking that Arel wants violence against conservatives.

On Sunday, Arel also tweeted an endorsement of violence against Mike Cernovich, remarking that a troll who physically approached Cernovich should have assaulted him. That tweet was subsequently deleted too. 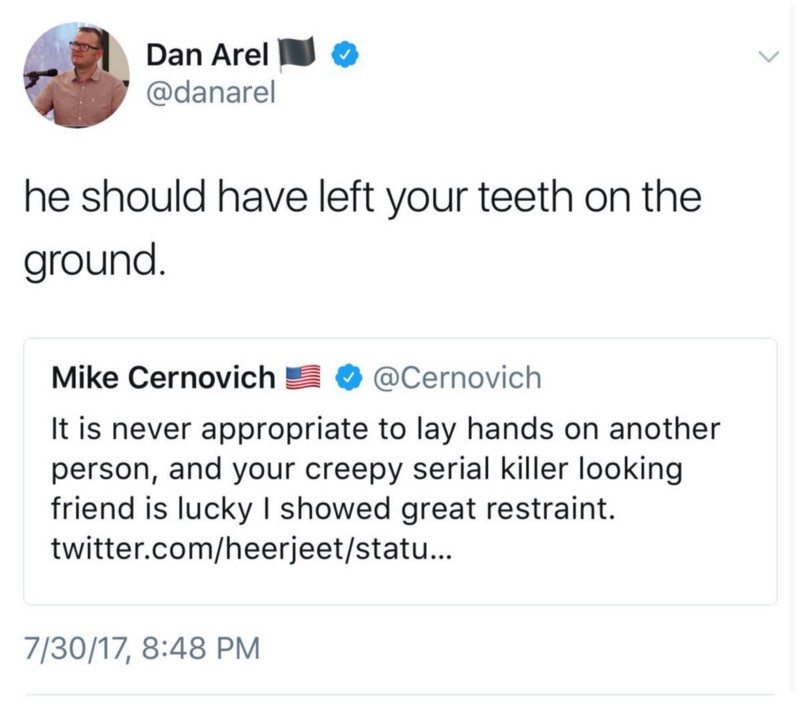 According to Watson, The Hill did not respond to inquiries.

In February 2011, I first said that liberalism, at its core, is an ideology of rage and hate.  Liberals like Arel prove that assertion correct on just about any given day.