One of those pages was “Spokane Conservative Examiner,” a page started by yours truly over eight years ago — in 2010 — to coincide with the column by the same name at Examiner.com.  Even though Examiner.com went belly-up in 2016, the page was maintained and used to post links from this site.

We attempted to merge that page with “Conservative Firing Line” in 2016, but Facebook denied all attempts to do so.  The page remained in operation until Friday afternoon, when we were presented with this: 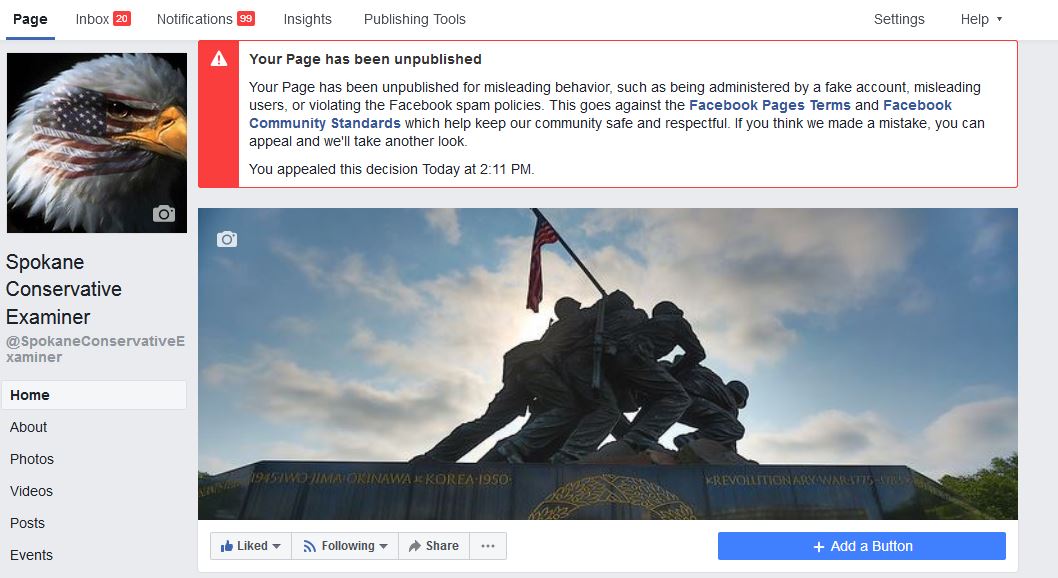 We appealed the decision and reached out to Katie Harbath.  Harbath responded by telling us the page violated the following rule:  “Artificially increase distribution for financial gain.”

What in the world does that mean?  Does that mean that every website with ads are in violation?  If so, would that not mean that sites like CNN should lose their page as well?  Facebook itself also makes money from ads, so technically, wouldn’t Facebook be in violation of its own rule?  Now THAT would be something to see — Facebook banning itself…

As written, the rule appears to be one that no one can follow.

We reached out to Harbath for clarification but did not receive a response as of this writing.

In October, over 800 pages and accounts — many of which were run by conservatives — were taken down for the same rule violation.

One of those taken down was Right Wing News, run by triple amputee veteran Brian Kolfage.  Kolfage has taken his message to various media outlets and has started a site, Fight4FreeSpeech.com, with the goal of stopping the spread of social media censorship.  Additionally, a GoFundMe campaign has been started to fight Facebook censorship.

Moreover, activist Chris Sevier drafted the “Stop Social Media Censorship Act” which is being considered by various state lawmakers across the country.

Facebook can claim the pages are now “artificially increasing distribution for financial gain,” even though the pages have operated the same way for nearly a decade, but the result is the same.

Incidents like this, by the way, were the motivation behind “Banned: How Facebook Enables Militant Islamic Jihad,” a book written in 2016 by yours truly and American-Israeli Adina Kutnicki.

The only questions we have at this point are: When will Facebook kick off its anti-conservative “final solution,” and will Congress finally wake up and take action?

Given that conservatives are rapidly becoming persona non-grata on the platform once dubbed the “world’s most dangerous censor,” we advise that readers revert to the pre-Facebook practice of bookmarking sites like this to keep up with posts and articles.

Conservatives can and should make use of alternative sites like ProAmericaOnly, Tea Party Community, Deplorables Online, Mumbl It, TrumpBook USA and OneWay.  There alre also alternatives for Christians, like Social Cross.

Do You Want To See Where This Is Going If It’s Not Stopped? Employees Chase Down & Assault Customer Without A Mask…
February 28th, 2021 DC Clothesline

Do You Want To See Where This Is Going If It’s Not Stopped? Employees Chase Down & Assault Customer Without A Mask…
February 28th, 2021 DC Dirty Laundry
Tweets by Conservative Firing Line