Facebook has announced that it will no longer ban posts about the Wuhan Lab origin of the COVID-19 – Chinese virus, as the right people are now agreeing to the Lab Origin theory.  Unfortunately, Facebook blocked its users from spreading the truth about the origins of the virus that has killed more than 3.5 million people worldwide and 604,000 Americans.

What is truly outrageous is that these self-righteous censors have once again found themselves on the wrong side of truth as the moral relativists of the media find truth and science to be fungible depending upon their political needs.

The decision comes in the wake of news that the Biden Administration shuttered a secret State Department investigation into the origins in March, only to backtrack earlier this week as even the left’s health Shaman Anthony Fauci has had to admit that he cannot be certain if the virus originated in the Wuhan Lab that his agency funded.

Former Secretary of State Mike Pompeo is quoted in National Review condemning the failure by the establishment media’s handling of the Wuhan origin probability saying, “You realize that organizations like the New York Times, who have now as much as said we didn’t believe it because it came from the Trump administration, are truly fake news and are operating in a political space devoid of science.”

Facebook’s announcement puts them in the same category, only worse. While the New York Times failed their thousands of readers through their obvious political lens based reporting, Facebook, the formerly neutral platform, censored their users as well as multiple high ranking government officials who had access to intelligence indicating the Wuhan Lab origin theory, because it didn’t fit into their neat package of blaming President Trump for everything COVID.

This news comes as some Facebook shareholders are demanding even more censorship on the site of fake news.  If this came to pass, would the New York Times and Washington Post be censored as these two outlets alone have been the source of more made up stories than any other media outlet in the nation?

In spite of the evidence, it is clear that rather than apologizing and being repentant for regularly being caught censoring truth, Facebook will continue denying their users access to information that the ignorant masses of the Silicon Valley deem unacceptable as they challenge their world view.

Given their history, news outlets should wear being censored on Facebook as a badge of honor, and a proof point that they are over the target in exposing the left’s failures and false narratives.

If nothing else, Facebook users should now know that the virus may have come from the Wuhan, China lab discovering this a full fourteen months after Pompeo received a comprehensive intelligence briefing pinpointing the likely Lab origins of the virus.

Americans for Limited Government is urging the public to contact Congress HERE to urge them to pass legislation by Representative Bill Posey to establish an independent commission to get to the bottom of the COVID virus origin and determine what, if anything, America should do in response.

CLICK HERE TO SEND AN EMAIL TO YOUR MEMBER OF CONGRESS URGING THEM TO CREATE AN INDEPENDENT COMMISSION TO STUDY THE ORIGINS OF THE COVID VIRUS. 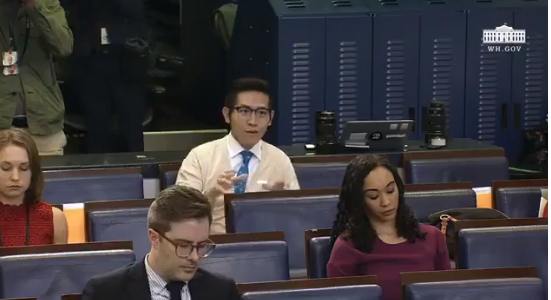 Chinese Communist Party: Why Are They Allowed at White House Briefings?