Don’t expect the Western media to ever factually report what the Catholic Church actually teaches. If anything, either through willful ignorance or willfully lying, the liberal media has quite the knack of bastardizing Catholic teaching to fit their agenda.

Vice Presidential nominee Tim Kaine certainly splashes plenty of gasoline on the fire, especially when he’s perpetually portrayed in the press as a “staunch Roman Catholic.”

In this case, the offending news organization is the McClatchy Company news service. The same McClatchy that erroneously published as fact that the Catholic Church “believes executions to be wrong.”

It’s a perceived fact by many orthodox Catholics that the Church has pseudo-schismatic bishops; “it’s only a sin if you think it’s a sin” spouting priests and nuns; and an ever growing percentage of laity that are clamoring for democracy vice theocracy within the Church.

Well, these certainly are times that can be somewhat confusing for tradition-minded Catholics. Especially with secular leaders and a complicit press that have quite the penchant for distortion and falsehoods when it comes to our Church.

Now I’m to understand that the latest and greatest threat to my immortal soul may come down as to whether or not I happen to be a proponent of the death penalty as utilized by proper public authority and only in cases of extreme gravity.

I recently had a nun state that I had a “bloodthirsty attitude” because I have the bad manners to adhere to the Church’s teaching on the death penalty. Needless to say, the conversation deteriorated rather quickly.

It eventually boiled down to me asking the good Sister one simple, basic question; “Do I have the stain of sin on my soul if I believe in the death penalty as the Church defines such?”

This may be presumptuous of me, but I kind of hoped that a Catholic nun would be able to answer me. But what New Age retort did I get? “Only YOU know what a sin is in your heart.”

Gee, Moses was given The Ten Suggestions? Jesus preached The Recommendations on The Mount? What’s a former Altar Boy to do? How many other fellow Catholics are being led around by the nose by the media and weak priests and bishops?

Presumably already known to Tim Kaine and McClatchy news, the Catholic Church has had, and continues to maintain, the right and duty of legitimate government to execute, if need be, those individuals who have utilized their God-given free will to commit any given heinous capital offense.

Let’s not forget those found guilty at the Nuremberg Trials and The Tokyo Tribunals for such minor oversights in judgement like the Treblinka Death Camp or the Bataan Death March. I feel safe to say that if anyone deserved the hangman’s noose, it was them.

Let’s take a look at what the Holy Bible says about all this. The 5th Commandment states “Thou Shalt Not Kill”. Pretty straightforward.

Yet we must keep in mind that Sacred Scripture runs the gamut from Hebrew to Aramaic to Greek to Latin to the hundreds of various modern languages. More than just a few biblical scholars have said that the word “kill” in the specific sense of the word means “murder”.

While I’m on the Book of Exodus, take a gander at 23:7. “Do not slay the innocent nor the righteous.”

Time for a common sense check. Does that not imply that there are those that DO deserve to be slain? Of Course it does.

Even the New Testament is replete with examples.

St. Paul tells us in Romans 13:4 — “But if you do evil, be afraid, for it (authority) does not bear the sword without purpose; it is the servant of God, to inflict wrath on the evildoer.”

Even in The Gospel of St. Luke, when Jesus was being crucified, the Bad Thief mocked Christ to order Angels rescue them. But the Good Thief, St Dismas, rebuked him by saying, “We have been condemned justly, for our sentence corresponds with our crimes, but this Man has done nothing wrong”.

Did Jesus at any time refute Dismas? Nope. In fact, Christ’s silence was deafening on the question of the correctness of the execution of St. Dismas.

Now we all know that Christ told us to turn the other cheek and to carry our enemy’s pack an extra mile.

But how can anyone with an iota of common sense believe that Christ meant for us to totally and never endingly submissive in the face of evil? No, in the name of Christian Charity, we are expected to defend ourselves, our families and our society.

Granted, any given meaning of any given passage of Sacred Scripture can be interpreted by any given individual. That’s why we Catholics have the Magisterium, our teaching authority.

The Catechism of the Catholic Church, paragraph #2267 specifically states that;

“The traditional teaching of the Church does not exclude, presupposing full ascertainment of the identity and responsibility of the offender, recourse to the death penalty, when this is the only practicable way to defend the lives of human beings effectively against the aggressor.”

That pretty much ends the discussion. Yet the more liberal individuals who call themselves Catholic cite the following from Catholic teaching regarding the death penalty;

“If, instead, bloodless means are sufficient to defend against the aggressor and to protect the safety of persons, public authority should limit itself to such means…”

I agree wholeheartedly. But just what IF bloodless means are not sufficient?

Or Henry Lee Lucas, who bragged of killing over 264 people? That’s 23 more innocent people murdered by him than all of the Marines killed in the Beirut Bombing.

What do we say to the parents of 12-year-old Polly Klaas? That the legally released felon that kidnapped, raped, sodomized, and eventually sexually tortured their little girl to death (with a pair of vice grips and a hunting knife) that he really isn’t all that great an aggressor to the public order?

Unfortunately, there are those that maintain that the justifiable taking of the life of a capital offender, as a last resort and only in extreme cases, is somehow inconsistent with the teachings of Jesus and incompatible with being a faithful Catholic.

Those of that mindset are sailing into dangerous shoals. We all have God-given free will. And with that free will comes the demand that we be held accountable for our actions.

And with that comes the understanding that If anyone commits evil against my family or myself, I fully expect that person or persons to receive the corresponding punishment.

I also agree that there are inconsistencies and prejudice within our legal system. But due to a minority of abuses, doesn’t is just make plain old good sense to just correct the problems, and not allow the scales of justice to be tilted all the way to the extreme notion that there are no crimes against humanity that are deserving of the ultimate punishment?

But I digress. It’s just like with our own children. When we punish then, do we still love them and forgive them? Sure we do.

But will we still give them the punishment that they deserve? Sure we do.

If someone were to murder a member of my family, am I expected to forgive them…. even love them? Of course.

And as they are being strapped to the table, I hope I can say “I forgive you and I love you. And you are about to receive the just punishment that you deserve.”

And yes, I realize that many leaders within the Catholic Church itself are personally opposed to the death penalty. And that’s exactly what it is – their personal opinion.

But while I’m pointing out the false Catholicism of Mr. Kaine, take a long, hard look at the below photo. So much for all that “staunch Roman Catholic” drivel. 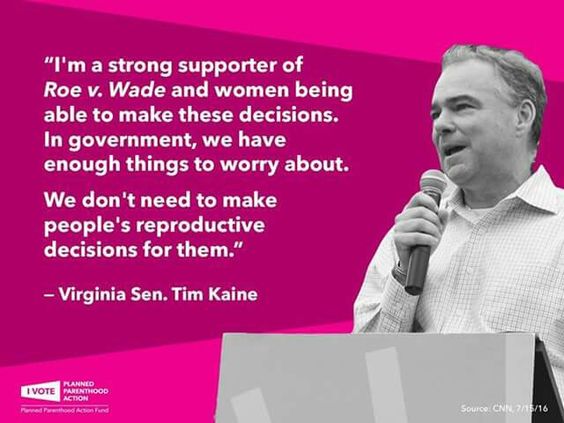 It’s a quite simple solution that Mr. Kaine need to make.