Haddam, CT council member Melissa Schlag took a knee during the Pledge of Allegiance on July 16 to protest President Trump’s comments after the summit with Vladimir Putin. And she stated that in her opinion the pledge has nothing to do with the flag.

“The Pledge of Allegiance doesn’t have anything to do with the flag, in my opinion. I believe in our country. I love our flag and the United States of America.”  Schlag to WTIC-TV. 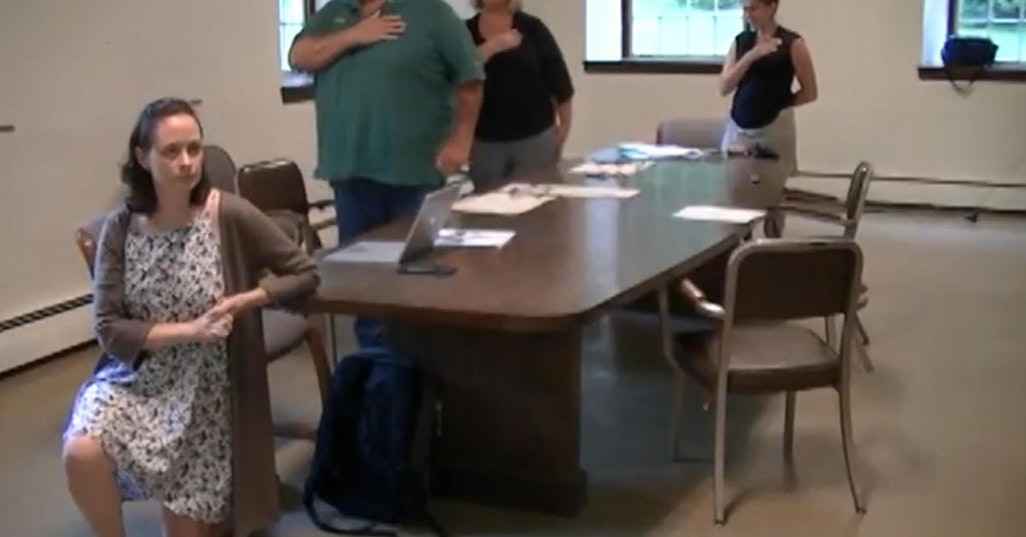 Newsflash, lady, no you don’t love America and the flag. And your “opinion” is wrong.

“I pledge allegiance TO THE FLAG of the United States of America, and to the Republic for which it stands,  one nation, under God, indivisible, with liberty and justice for all.”

It has EVERYTHING to do with the flag. And her “protest” garnered anger throughout the community and beyond.

“Disgusting, if you ask me. That’s our flag. It’s disrespecting our whole country and that’s not OK. … I used to like her but I would never vote for her again. She’s done as far as I’m concerned.” Haddam resident Ken Pellegrini

But a “difference of opinion” is not how the leftists operate now. They operate in doing whatever the heck they want no matter how offensive their actions are to the rest of America. And they want the headlines, a place to air their opinions so that everyone will look at them and think wow they’re standing up for something. No, they’re being ignorant and disrespectful. Putting the flag in the center of their “protest” is abhorrent and ridiculous.

“She took a knee and she refused to stand for the flag. There’s a lot I objected about Obama but in a million years, I’d never do that. Country first.” Debbie Dawson, Haddam resident

You want to protest the President, go write letters, Tweet on Twitter like everyone else. But don’t disrespect the flag that men and women have died for. Schlag, by the way is a Bernie Sanders supporter who believes that Trump’s immigration and climate change policies are bad.