“Before there can be any discussion about how best to fix or nix NAFTA, America must enforce NAFTA. Mexico has been found in violation of antidumping rules by the U.S. International Trade Commission in 2015 for dumping sugar on U.S. markets illegally since 2008. President Trump has been clear that he is going to enforce NAFTA while pursuing a new and better deal for the U.S. economy and American workers. There can be no better time for the President to make this clear to the Mexican government than right now while the Mexican Economy Minister Ildefonso Guajardo is in D.C. that the dumping must stop either through a negotiated settlement or through antidumping and countervailing duties.

“That is why Americans for Limited Government has been joined by the Hispanic Leadership Fund, the Institute for Policy Innovation, the 60 Plus Association, the Institute for Liberty, Citizen Outreach, Consumers Alliance for a Strong Economy, Less Government and the Thomas Jefferson Center for Public Policy in submitting a letter to President Trump urging the administration, with its new U.S. Trade Representative Robert Lighthizer, to keep the President’s promise to enforce NAFTA.”

In an op-ed posted at The Hill, Manning added:

NAFTA, like all trade agreements, lays out a series of rules to govern trade between agreeing nations, in this case between the United States, Mexico, and Canada. These rules typically include a lowering of tariffs that can be rescinded or changed if the terms of the agreement are breached. When Canada was recently found guilty of illegally dumping softwood timber into the U.S., the Department of Commerce increased tariffs against Canadian timber to punish the offenders. The tariff increases can be modest or more punitive depending upon how flagrant the violation.

Mexico is now in the bullseye with Commerce Secretary Wilbur Ross deciding whether to impose sanctions based upon an egregious case involving the dumping of Mexican sugar into the United States over the past few years. In 2015, the U.S. International Trade Commission determined that Mexico is in violation of NAFTA, but the rogue country continues its dumping anyway. On top of the current sugar case, the Commerce Department is currently enforcing 10 dumping and subsidy cases against Mexico on everything from tomatoes to clothes washers and steel pipe.

The consequences of Mexico’s sugar rush have been felt in the United States, as the last sugar producer in the state of Hawaii closed its doors earlier this year, and a major sugar beet factory in Wyoming is scheduled to go belly up soon. But it isn’t real competition that killed them, instead both have been unable to compete with the flood of Mexican sugar that has engulfed and distorted U.S. markets.

“The Trump administration may choose to fix or nix NAFTA, but in the weeks ahead it is imperative that they vigorously enforce it,” he wrote. “The June 5  Mexican sugar sanctions deadline will provide Secretary Ross the perfect opportunity to make just that point to the Mexican and the Canadian governments, and set the tone for one of the most important economic renegotiations in our nation’s history.”

Those who wish to make their voice heard on this issue can go here to take action. 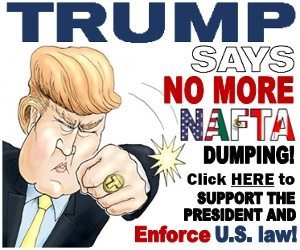 Cartoon of the Day: Sinking Fast