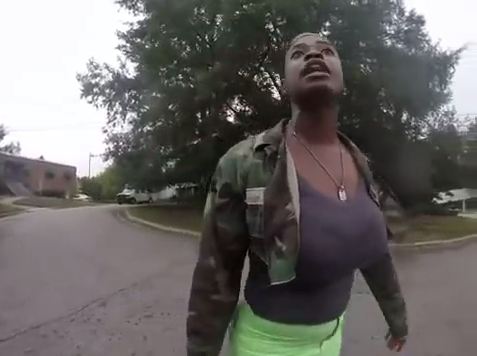 On Monday, Paul Joseph Watson posted a video of a woman he identified as a Black Lives Matter activist demanding that all white babies be murdered.

“I hope they kill all the white babies,” she screamed while jumping up and down.  “Kill ’em all right now.”

#BlackLivesMatter activist: "Kill all white babies". It's a peaceful group though & not racist at all – CNN told me. pic.twitter.com/q3fRYBFZxS

It’s not been verified if the person in the video is actually a Black Lives Matter supporter, but she does support unfettered abortion, according to a post at Life News:

A video uploaded a month ago shows a black abortion supporter threatening pro-lifers outside an abortion clinic with her water gun, using expletives, racist rants, and displaying her hatred toward Christianity.

Her vicious and hateful attack was not only caught on camera but was uploaded under the video title, “Best way to deal with pro-lifers.”

Now, I understand that this is a water gun- but- why is it that a video called “the best way to deal with pro-lifers” which involves the use of any gun- is not being denounced by the pro-choice and reproductive rights community?

Moreover, the article said, she made it clear that she doesn’t believe in God: “I don’t f***’in believe in your God cause He white with Lilly hair.”

After being told that she was killing black babies by taking a relative to the abortion clinic she says, “I hope they kill all the white babies,” as she turns her rear end disrespectfully to the pro-life preacher.

Here’s the full 7-minute video the clip came from: