Lisa Jones, a self-proclaimed communist whose views place her way left of Democrat Socialist Alexandria Ocasio-Cortez on the ideological spectrum, is bubbling over with great ideas, judging from her Facebook and Twitter pages. For example, she suggested a two percent white privilege tax and a one percent male privilege tax.

She also advocates doing away with police, prisons, and money and believes that misgendering people who identify as transgender or nonbinary is an act of violence. Jones apparently hasn’t followed her modest proposals through to their logical conclusion since, if she had, she would have realized that with no police, prisons, or money there would be no way to punish offenders.

Which brings us back to her punitive anti-white and anti-male taxes and to the questions, respectively, 2% and 1% of what? If she is envisioning taxing real property, how frequently are these taxes to be levied? Daily? Hourly?

Not all of her ideas are novel. Take her recommendation that the White House be renamed “people’s house.” The presidential residence is already known as The People’s House, and Barack Obama beat her to the punch when it comes to bathing the building in rainbow colors. 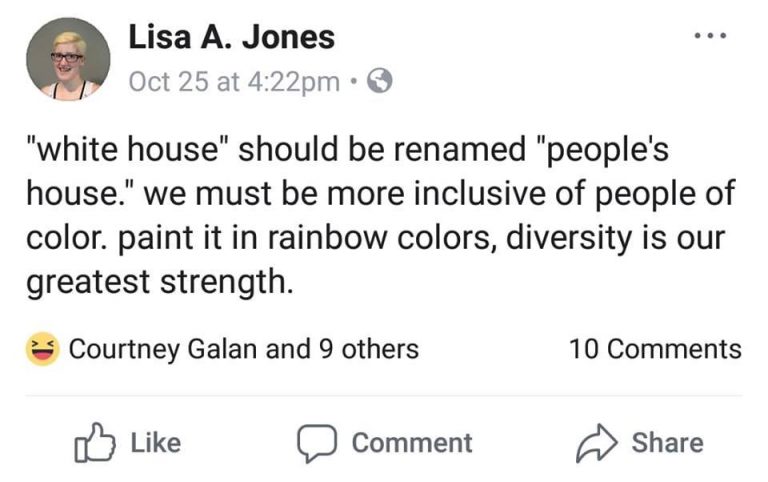 When it comes to her prescription for a moneyless society, Jones’s naïveté is showing. 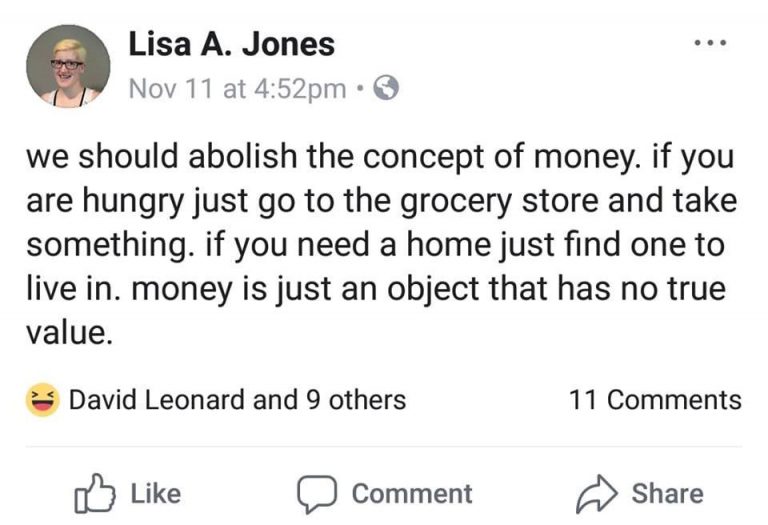 If people simply help themselves to groceries or shelter when the need arises, then they are effectively stealing someone else’s goods or property — unless Jones is under the misapprehension that elves stock supermarket shelves and are responsible for home construction.

It is possible that the social media pages attributed to Jones are spoofs. If so the joke is on the creator since a good many of the ideas presented are straight out of the far-left, politically correct gospel spouted by any number of personalities appearing on CNN and MSNBC. Example:

And here’s another, where she demands the elimination of the First Amendment right to do exactly what she’s doing:

And of course, she called for a repeal of the Second Amendment right to keep and bear arms:

So, what, exactly, does Jones want to do with that one and two percent tax?  We’ll let her explain:

And naturally, she tells us that we shouldn’t be frightened of Communism, despite the 100 million+ it has killed:

Bill O’Reilly Smashes On Liberal Media, Says They Are Out To ‘Destroy’ Conservative Voices
Ken Blackwell

Letter to rich white parents: Keep your kids out of Ivy League schools to make room for POC … or else
July 26th, 2021 Liberty Unyielding

Taking On School Board Tyrants – This Is How You Do It!
July 26th, 2021 Sons of Liberty Media
Tweets by Conservative Firing Line