It has been a long time since the word has been as collectively stunned as they are right now.  The images coming out of the Kyiv suburb of Bucha are as horrifying as anything this world has seen outside of World War II.

Men, women, and children, laying lifeless in the streets.  Many of them bound at the hands.  Some raped.  Others with their limbs removed or tongues cut out.

The atrocities were enough to conjure a direct comparison to the horrors of the Nazi regime by Ukrainian President Volodymyr Zelensky, himself a descendent of victims of The Holocaust.

He made the claim after Russian forces pulled out of many towns near the capital city of Kyiv, allegedly leaving bodies in mass graves. Russian Foreign Minister Sergei Lavrov accused Kyiv of setting up a “stage-managed anti-Russian provocation.”

“I’ve visited our cities in the Kyiv region, which we liberated from the occupiers: Stoyanka, Irpin, Bucha,” Zelenskyy said in his daily address shortly after midnight Tuesday. “Of course, now this area does not look like yesterday. The bodies of killed people, killed Ukrainians have already been taken from most streets. But in the yards, in the houses, the dead still remain.”

“We have just begun an investigation into all that the occupiers have done,” the president added. “At present, there is information about more than three hundred people killed and tortured in Bucha alone. It is likely that the list of victims will be much larger when the whole city is checked. And this is only one city. One of the many Ukrainian communities that the Russian military managed to seize.”

“In many villages of the liberated districts of the Kyiv, Chernihiv and Sumy regions, the occupiers did things that the locals had not seen even during the Nazi occupation 80 years ago,” the president alleged. “The occupiers will definitely bear responsibility for this.”

Zelenskyy has declared to the United Nations that war crimes have been committed in Ukraine several times over the course of this Russian invasion, and he has previously suggested that this is, in fact, a “genocide”. 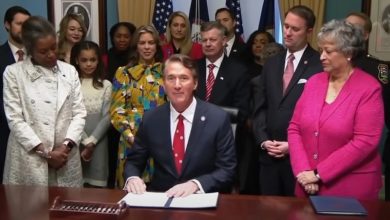 VA Gov. Youngkin Gets ‘Off On The Right Foot’