In only seventy-eight days, voters will be going to the polls for the mid-term elections.  This will be a crucial election for the future of the United States and the future relationship between the U.S. and Israel.

The Democrat Party has been lurching left for years now, but since the end of the Bubba Clinton presidency, they’ve been shifting left at speeds which defy the laws of physics. Aided by eight years of an extreme leftist in the White House, the Democratic Party agenda has become dominated by radical progressives and socialists.

When socialist Alexandria Ocasio-Cortez defeated a mainstream leadership Democrat, the entire Democrat world (except for others in establishment leadership) cheered. The media, the Democrat’s base, and the punditry acted as if the victory of a socialist in a primary had energized them all somehow. But they missed the real story, there was more than one socialist winner.

Citing the NY Times, Axios reports that Democratic Socialists of America, which endorsed Ocasio-Cortez in her win over powerful NY Democrat Joseph Crowley is a growing force within the party. Its membership has ballooned from 7,000 to 37,000 members since the 2016 election. And the DSA has a very leftist agenda such as Medicare for all and abolishing ICE. And other far-left groups are joined in on the fun.

While these extreme left groups have not become the majority of the party, they have begun to control the agenda. For example, the party is now advocating Medicare for all, a program that will triple the federal budget, and like Obamacare (only worse) the radical left Medicare for all will force mediocre health care on all Americans (except Congress and their staffs). The leftists also advocate reversing the tax cuts implemented last year, which based on the increase in Gross Domestic Product and decreases in unemployment seem to be creating an economic boom.  The move toward open borders is another example of the far-left influence.  Senators like New York’s Chuck Schumer who supported the “Secure Fence Act” when it was passed in 2006 are fighting tooth and nail against Trump’s wall proposal. Those on the far-left are blaming ICE for enforcing laws that Congress passed. And their supporters in the leftist media , are telling lies about ICE, like the recent story about the pregnant woman whose husband was arrested while driving her to the hospital, that left out that it was for a scheduled “C” section, to an emergency, and he was wanted by the Mexican authorities for murder.

Remember this picture published in liberal papers to trash Trump policies, but was taken in 2014 when Obama was president? 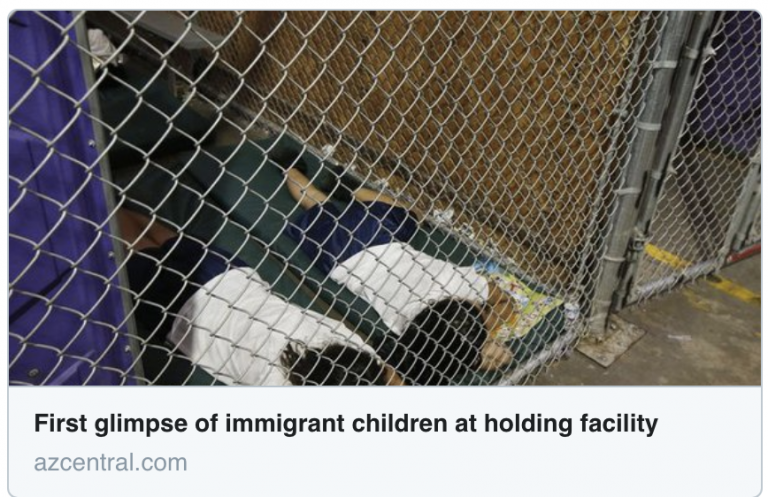 As one friend commented to me, “What is it with these leftists, it’s the middle of August, and they are fighting to eliminate ICE and straws?”

And all this is happening while the legitimacy of President Trump’s victory is contested by the Democratic Party on an almost daily basis.

It looks to get worse. Throughout the primary season, the Democrats have nominated leftist anti-Israel candidates such as Alexandria Ocasio-Cortez who called Israel an occupier but couldn’t answer when asked to explain herself

Almost guaranteed to win in the general election is Minnesota Democratic candidate for Congress, Somali-American lhan Omar, who once tweeted that Israel had “hypnotized the world” to ignore its “evil doings.” Earlier this year she defended that tweet saying she was calling attention to the “Israeli Apartheid regime” and was not anti-Semitic.

Michigan Democratic Party nominee for Congress Rashida Tlaib is also not a fan of the Jewish State.  After her primary win, she told In These Times that she no longer believed in the two-state solution, “One state. It has to be one state. Separate but equal does not work. I’m only 42-years old, but my teachers were of that generation that marched with Martin Luther King. This whole idea of a two-state solution, it doesn’t work.”

The Palestinian American who is also a Democratic Socialist believes that the U.S. should not be giving aid to Israel, “Americans should not be aiding any country that doesn’t support human rights. I’ve been very clear. I will not support racist countries that pick and choose who gets access to justice.”

Her positions are so radically anti-Israel that even J-Street withdrew their endorsement.

Tlaib is running unopposed, and will most likely win in November

It’s not just the brand-new leftist Democrats with anti-Israel positions.  Established ones also display unfair stances toward the Jewish State. Socialist Bernie Sanders (VT) who has a long anti-Israel track record is also running on the Democratic line this year for the first time, as he will probably run for their 2020 presidential nomination. Recently Sanders has called for the condemnation of Israel for protecting itself against the recent Hamas attack on the border.   Another leftist candidate, Elizabeth Warren (Mass) took the passive-aggressive Obama approach. First saying Israel has the right to defend itself, then urging the Jewish State to show more restraint. She also condemned Trump’s decision to recognize Jerusalem as Israel’s capital.

Democrats who used to be very pro-Israel are feeling the heat from the left and are inching away from their former positions. For example, in June 2017 Dianne Feinstein (CA), Richard”Stolen Valor” Blumenthal (CT) and Dick Durbin (Il) all voted to urge the U.S. to recognize Jerusalem as Israel’s. In December of the same year, they all criticized Trump’s recognition of Jerusalem as Israel’s capital.

New York Senator Kirsten Gillibrand’s move toward the socialist positions including a rejection of Israel has been previously documented at this site, but another area Senator, Cory Booker (NJ) has also moved away Israel support to placate the leftists.

At the recent NetRoots convention he was pictured holding an anti-Israel sign saying, “From Palestine to Mexico, all the walls have got to go” and depicting a crumbling brick wall. While A Booker spokesman said, the senator had no idea the sign had anything to do with Israel. If that isn’t a lie, then Booker can’t read because the message on the sign or on the t-shirt of the woman he has his arm around is clear. 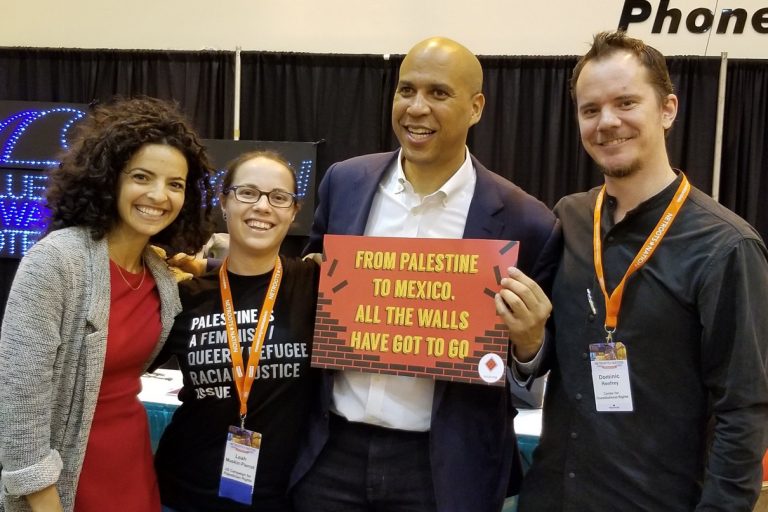 Booker also voted against the Taylor Force Act, when it was a stand-alone bill.  The Taylor Force act cuts U.S. aid to the Palestinian Authority by the amount of blood it pays convicted terrorists and their families. Booker’s no, along with those Democratic senators such as Patrick Leahy (VT) and Dianne Feinstein (CA) prevented the bill from gaining cloture in the Senate. The law was finally passed when it was added to the December omnibus spending bill to avoid a government shut-down.

Here’s the bottom line, when you go to the polls in two and a half months, please understand the issues you are voting on, ask yourself if you want higher taxes, a porous border, and mediocre health coverage that will triple the federal budget.

Trump’s policies have the economy humming along, GDP is growing, unemployment is falling. For the future of America, it is crucial those economic policies are continued.

You should also consider which party supports Israel, our number one ally in the middle east. In 2008 this site suggested that a Barack Obama presidency would be the most anti-Israel in history, that prediction was correct. In 2016 we predicted that the Trump Administration would be very pro-Israel, also accurate. Today the forecast is the loss of a Republican majority in Congress will harm Trump’s ability to maintain his pro-Israel policies, he will have too many other priorities, such as fighting for the economy and possibly fighting impeachment.

If you are a supporter of Israel before you vote, remember how the party has moved away from Israel in its 2012 and 2016 platforms. Remember how the deputy chairman of the party is Keith Ellison, a student of Louis Farrakhan. Remember the twenty-one other Democratic members of Congress in the Congressional Black Caucus who hid their association with Farrakhan. Remember how Democrats such as Kirstin Gillibrand and NY Governor Chris Cuomo demonstrated their support of anti-Semite Linda Sarsour, or how Democrats fawned over Al Sharpton who led two anti-Semitic pogroms in New York City at his 60th birthday gala. It was attended by Democrats like Chuck Schumer, Kirsten Gillibrand, and Jerold Nadler. Remember how the Democratic Party voted for the Iran Deal, and how Obama trashed Israel with a vote at the UN days before he was to leave office. Remember to ignore the leadership of Jewish Organizations such as the ADL, and the AJC who knew about Obama’s plans to drive a wedge between the U.S. and Israel but remained silent, proving their primary loyalty is to the Democratic Party.

Understand that as the Democratic party moves leftward, they are becoming even more anti-Israel.

And as the party moves leftward and becomes more anti-Israel and anti-faith, Jews who support the Jewish state have to move on from the Democratic party that continues to take them for granted.

Seventy-eight days, time to think about the future, it is essential for America and for Israel.

Open Conversation With Pastor Greg Locke: Do Christians Lead from The Back? Do Baby Christians Get A Pass To Leave A Trail Of Destruction? Is This The Fruit Of Mercy And Grace? Ignorantly, Some Think So…
December 3rd, 2020 Sons of Liberty Media