The Alabama Department of Law Enforcement will be handling the investigation into the officer-involved shooting that occurred on Thursday night at Riverchase Galleria Mall in Hoover. Hoover Police initially said that the man who was shot by an officer was the perpetrator. Now they say the man killed at the Alabama Mall was not the gunman.

“Over the past 20 hours, the Jefferson County Sheriff’s Office investigators and crime scene technicians have interviewed numerous individuals and examined several critical evidentiary items. New evidence now suggests that while Mr. Bradford may have been involved in some aspect of the altercation, he likely did not fire the rounds that injured the 18-year-old victim.” Hoover Police Captain Gregg Rector 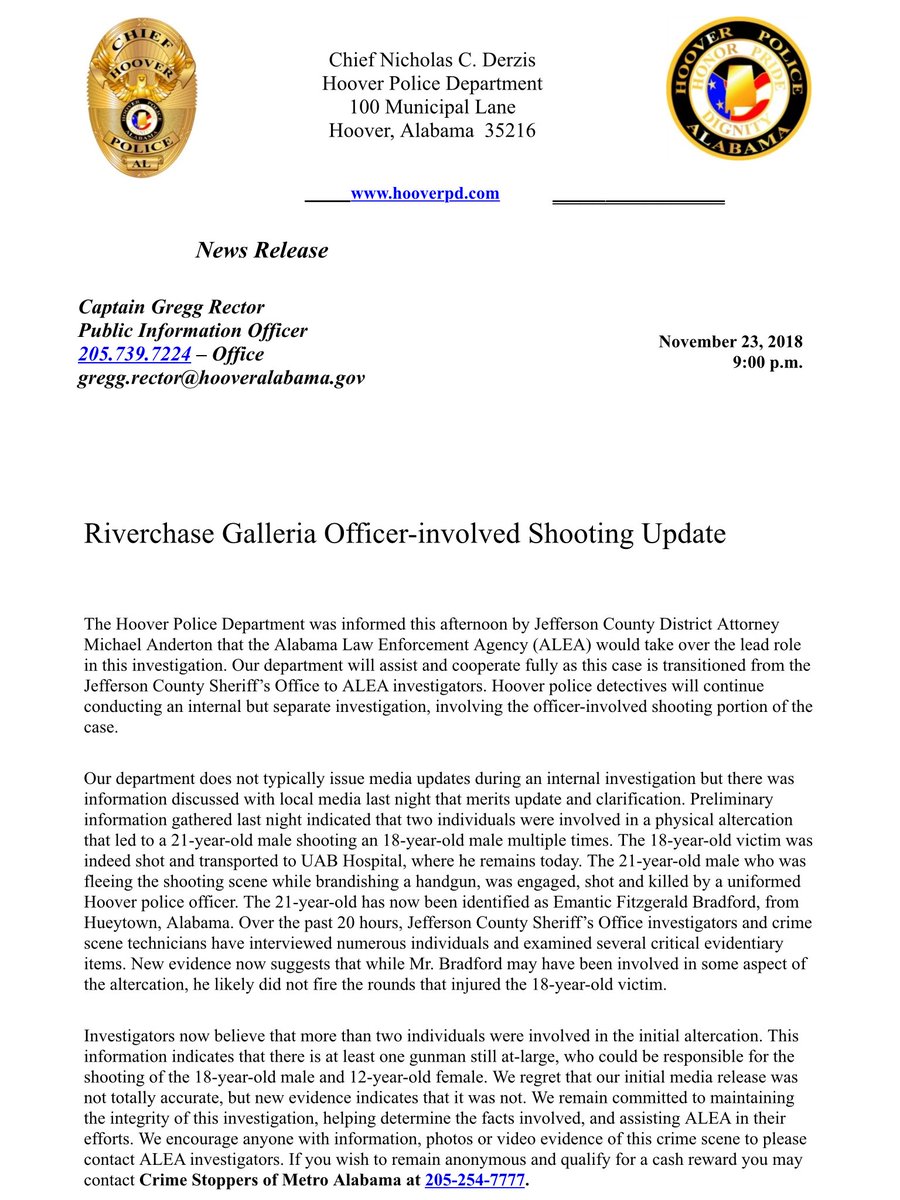 The Hoover police department says they “regret” that their “initial statement was not totally accurate.”

The man shot was Emantic Fitzgerald Bradford Jr., 21, of Hueytown.  He was a combat engineer in the US Army, and the son of a Birmingham policeman according to the Daily Mail.

The police officer who shot Mr. Bradford has not been named and is on administrative leave. Mr Bradford was said to be fleeing the scene and brandishing a weapon, which made it seem as though he was the shooter.

To put it bluntly, now there is a suspect on the loose and the trail is cold.

The 12 year old girl is in stable condition. The 18 year old male is still in serious condition as of Friday night.

Police are now saying that there were more than two people involved in the fight inside the Riverchase Galleria Mall.

Rector said investigators now believe that more than two people were involved in the initial fight before the shooting. The information also indicated that “there is at least one gunman still at-large, who could be responsible for the shooting of the 18-year-old male and 12-year-old female.”

Jefferson County District Attorney Mike Anderton said the State Bureau of Investigation would be leading the probe after discovering an eyewitness is related to Jefferson County Sheriff-Elect Mark Mettway, AL.com reported. Police has asked anyone with information regarding the shooting is asked to contact investigators.