On Tuesday, a woman identifying herself as one Cristina King Miranda claimed on Twitter that she knew both Judge Brett Kavanaugh and Mark Judge, two individuals named in an allegation of sexual misconduct by Dr. Christine Blasey Ford.

“I graduated from Holton Arms, and knew both Brett Kavanaugh and Mark Judge. Christine Blasey Ford was a year or so behind me, I remember her. I signed this letter. The incident was spoken about for days afterwords in school. Kavanaugh should stop lying, own up to it and apologize,” she said.

The tweet has since been deleted but an archived version can be seen here and below: 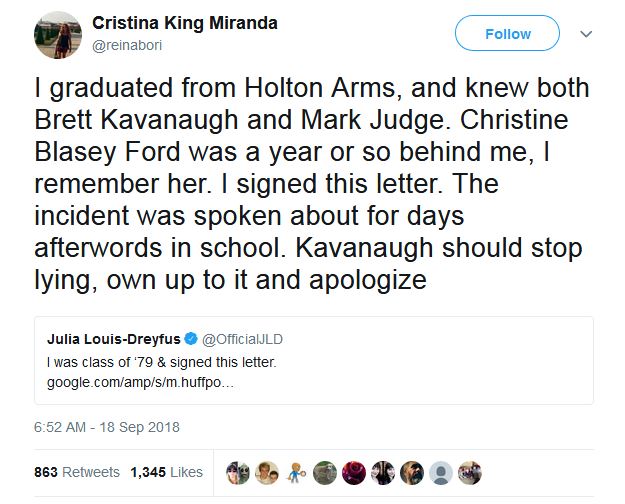 But, Twitchy said, this claim certainly doesn’t fit with what Ford herself alleges.  As you may recall, Ford claims she never spoke of the incident until sometime about 2012.  Was Ford lying or is this person lying?

Who talked about it? Ms. Ford told the Washington Post she told nobody at the time. https://t.co/qCjLf3RIXO pic.twitter.com/4jO35xnbnL

This is interesting. Have not seen this claim reported, and Ford has said she didn't tell anyone or talk about it. https://t.co/abjt3s1KWz

Others noted a stunning contradiction in her tweet — namely the timing of the alleged incident:

Also she said she thinks it was during summer vacation.

This tweet doesn't fit the facts as Dr Ford has stated them.

No, it doesn’t.  But as we’ve seen in recent days, it seems that neither facts nor logic matter.

The alleged witness also wrote about it on Facebook:

Miranda later said she would not talk about her claim with the media and also admitted she has no first hand knowledge of the incident:

You posted complete hearsay & you’ve actually hurt Dr Fords case not helped. Your bias & prejudice displayed in your post was stunning to read. Bitter much?

As for the deleted tweet, Miranda says “it served its purpose.”