Liberty Island, New York City- Earlier on Wednesday, seven people were arrested at the Statue of Liberty after unrolling a banner that said “Abolish ICE.” They were from a group called Rise and Resist NYC. Later, a woman attempted to scale the base of the Statue of Liberty, but the earlier group distanced themselves from her, saying she had no connection to them. Tourists visiting Liberty Island were evacuated. 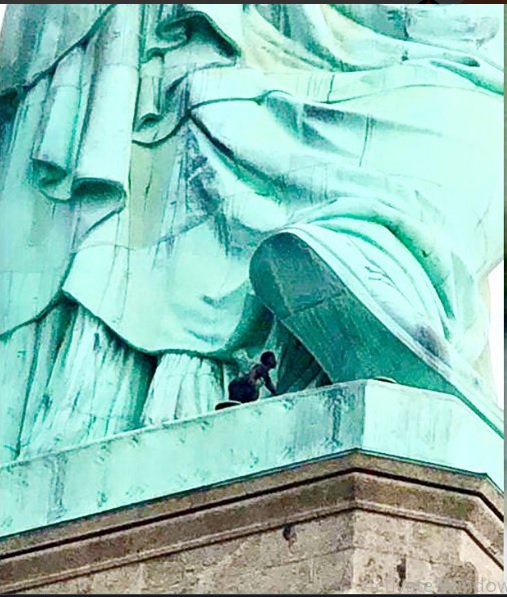 Fox News reports that the woman was arrested.

“The climber on the Statue of Liberty has no connection to our #abolishice action earlier today.” @riseandresistny on Twitter.

The 4th of July is a time when tourists like to visit Liberty Island. The woman’s actions caused the entire structure to be evacuated, which didn’t sit well with some who went there to enjoy a bit of American history, since reservations are required ahead of time for some of the features on Liberty Island.  Then there were the armchair quarterbacks who decided it was a great kind of protest.

Do ANY of these left wing idiots EVER stop spoiling vacations and holidays for others? Apparently not.

There is a protestor on the Statue of Liberty on July 4th. Must have a death wish. pic.twitter.com/L29NhXapps

NYPD helicopter watching the person very carefully, who has now unfurled some sort of flag or t-shirt #statueofliberty pic.twitter.com/1RwwSUA1aT

Law enforcement sources tell @NBCNewYork Liberty Island is being evacuated because of person attempting to scale the statue. 7 were arrested earlier for unrolling banner that said “abolish ICE” #statueofliberty pic.twitter.com/BRVZXMflyi

Yep, that’s a person sitting on the #StatueofLiberty alright. pic.twitter.com/Mlfqsd8BmL

Here’s the periscope of the guy climbing the #statueofliberty. https://t.co/seuuMtfopQ

And what did YOU do on your #4thofJuly ? This courageous woman was out fighting for the very soul of this country!#StatueOfLiberty #TheResistance #RiseAndResist pic.twitter.com/DLvgjP2Nrr

Crazy scene at the Statue of Liberty right now. Woman “protesting” scales the side of the monument. pic.twitter.com/R0C00AEJXA

Just trying to see the #statueofliberty and some idiot shut the entire island down trying to climb it. pic.twitter.com/WyzAFBdCol

Has anybody seen that moron that has climbed the Statue of Liberty, holding up a sign saying rise & resist. You know what, if you don’t like living in our country and living by the rules of this country go live elsewhere..you will realize what a privilege it is to live here!

We get it, you wanted your two minutes of fame. Now get your ass down from the Statue of Liberty so those that actually love and respect America can enjoy their day.

some dumbass climbs the “Statue of Liberty”…..she should look across at Ellis Island….where immigrants came to America…..legally

Then there were those who found humor:

I’m sorry lady but climbing the base of the #StatueOfLiberty to hang a banner doesn’t impress me, I saw a Raccoon scale a 25 story building for a can of cat food.