I found it refreshing this morning to read J.E. Dyer’s defense of the official portrait of Michelle Obama against the many nitpickers who found something to complain about.

I was actually prepared to offer up a defense of the portrait of her husband as well, or at least of Kehinde Wiley, the artist who painted it. I had seen all the scuttlebutt surrounding his fondness for painting black women holding a sword in one hand and a a severed head in the other.

Having co-authored and/or edited some dozen books on fine art in a previous life, I assumed the subject of the work might be the biblical story of Judith luring to her tent and beheading Holofernes, King Nebuchadnezzar’s Jew-murdering general. This subject matter has been grist for numerous paintings throughout the history of western art.

Sure enough, when I dug a little further I determined that that was indeed the topic of Wiley’s painting. I also uncovered this:

[Kehinde Wiley is] known for taking instantly recognisable portraits by the likes of John Singer Sargent or Jacques-Louis David and reimagining them to reflect contemporary African American icons.

Then I noticed a detail that initially escaped my attention. As this tweet observes, in Wiley’s take on the biblical story, the head of Holofernes is that of a white woman.

Jo’Nella Queen, a self-styled poet and activist, offers this analysis of the painting:

This art piece “Judith Beheading Holofernes,” 2012, Kehinde Wiley, places Women of Color, specifically a Black woman in a position of power (and majesty). This is so important because of the racism and  sexism that Women of Color have historically and continue to face [sic] today. (Not to mention other WOC who face marginalization because of other facets of their identity; SES, Queerness, Ability, trauma(s) in addition to this- the list goes on).

A closer look at the expressions on the face of the executioner and the severed head appear to bear out this reading, which creates a radically different mood and sensibility from earlier works. Compare for yourself Wiley’s work with one by Baroque painter Artemisia Gentileschi, appearing below it:

Taken in this light, the whole affair smells of blaxploitation in its latter-day form, with Hollywood cranking out remakes of earlier films purely for the purpose of recasting the lead as black man.

A little more digging into the artist’s pedigree reveals his motive in creating the painting, which he describes in a New York magazine interview as “sort of a play on the ‘kill whitey’ thing.”

In the end, this is vintage Obama — a man so hung up on race and racial grievance that he had no qualms about inviting to the White House a rapper who “sang” about killing police. His artist of choice also has an affinity for “gangsta” rap, having made “regal portraits of rappers including Notorious B.I.G.,” who was killed in a drive-by shooting after partying with members of the Bloods and Crips.

It seems that Wiley has also seen fit to rip off Jacques-Louis David’s 1801 painting “Napoleon Crossing the Alps,” which he reconfigured as “Napoleon Leading the Army Over the Alps.”  You can see the two side-by-side, below: 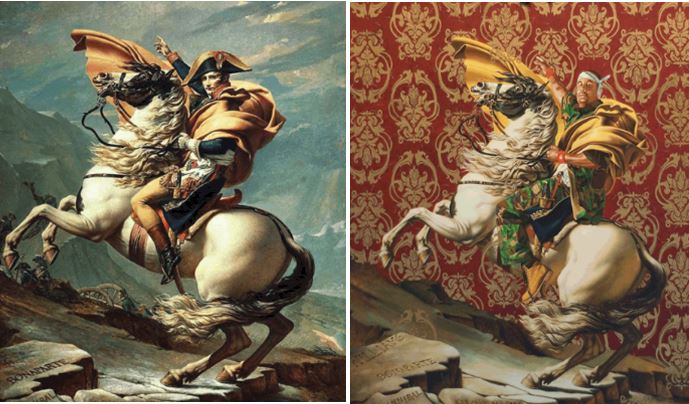 I offer my own version of that painting which contains as its subject the black man Wiley should have chosen as his present-day Napoleon: 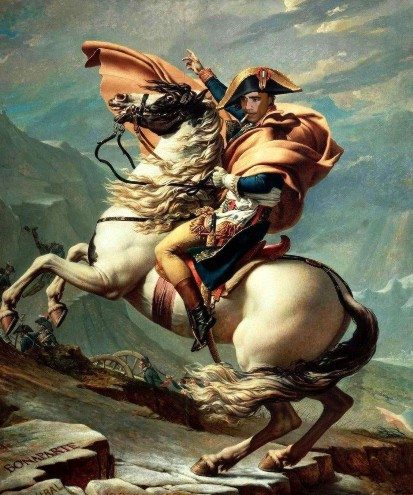 I call my masterpiece, “Napoleon Giving in to Another Bad Habit.”