The bombing arrested today has been identified as 56-year-old Cesar Altieri Sayoc Jr.  He has been reported as a Native American, and according to a photo posted on his social media page, he is a member of the Seminole Tribe of Florida.

Cesar Sayoc is a registered Republican who has been arrested 10 times, according to the Florida Department of Law Enforcement, including once in 2002 for making a bomb threat. His party affiliation was current as of Sept. 30, 2018, according to state voter files. State corporation filings show him as an owner or manager of two businesses, Native American Catering and Vending and Ver Tech AG.

FLASH: Cesar Sayoc, 56, pictured in this booking photo from an arrest, via @browardsheriff pic.twitter.com/zUSXxPlOyZ

Per Rick Leventhal of Fox News, Sayoc lives in Aventura Florida, he is a white male and former New Yorker in his mid-50s who has prior arrests for using the mail to make threats of violence to judges using the mail, so he was known to law enforcement. Apparently, the FBI has been looking at this nutjob for 24 hours.

According to Catherine Herridge of Fox News, there were five warrants granted by the Southern District of NY to allow the FBI to monitor Cesar Sayoc’s communication. Sayoc is said to have been traced by DNA and phone records.

More on Sayoc can be seen here.

Several of the packages went through a U.S. postal facility in Opa-locka, which is less than 10 miles from Aventura. Also, Aventura is near the offices of Debbie Wasserman Schultz, which may be the reason her office was used as the return address.  He was arrested by the Broward County Sherriff  at an auto parts store at State Road 7 at SW 6th Street in Plantation, Florida at around 10:30am According to  WFOR in Miami, a “loud explosion” was heard at the time of the arrest, possibly from a flash bang device used by FBI in the course of making the arrest.

Additionally, a law enforcement source told WFOR Cesar Sayoct is 56-years-old and they were led to him through DNA evidence.

A government source told Fox News the stamps are being analyzed by the FBI in Quantico. The source also said the investigation had progressed “significantly” and that the FBI is reaching out to retailers to zero in on where the elements of the bombs were made and where they were sold.

The envelopes and packaging materials were being closely analyzed and likely contain a treasure trove of DNA information. Tiny bits of genetic material – traces of sweat, skin cells, saliva, hair or fingerprints – are typically used as a roadmap to the suspect’s door, investigators and bomb experts say.

The FBI also wrapped a blue tarp over the top of a white van in the parking lot of the auto parts store, to preserve any evidence , before it was put on a flatbed truck and taken to an FBI facility. 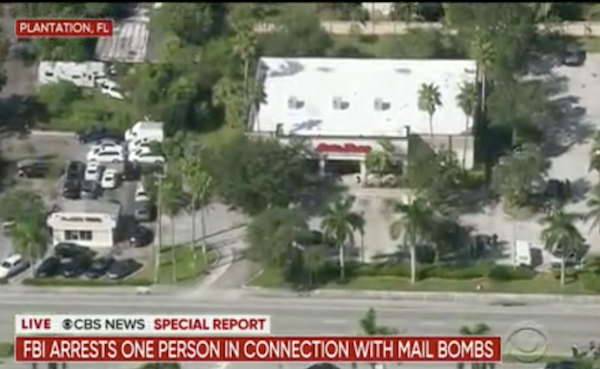 Per Heavy.com Sayoc has been arrested several times in Broward County, Florida, dating back to 1991,

His most recent arrest in Broward was in 2014. In 2002, he was charged with making a bomb threat in Dade County, Florida. He was sentenced to one year of probation. Prosecutors agreed to withhold adjudication of the felony charge, meaning it was dismissed after he completed the probation in 2003.

In 1991, Sayoc was charged with third-degree grand theft, a felony. He pleaded guilty that same year and was sentenced to two years of probation. In 1994, his mother sought a domestic violence injunction against Sayoc, court records show.

It shows how crazy Sayoc is, he beat up his mother.

Sayoc was arrested on drug charges in 2004. He was accused of possession and sale of steroids, along with possession of a controlled substance without a prescription, tampering with evidence, filing fraudulent tax returns, criminal use of personal ID info and possession or unlawful issue of a driver’s license. He pleaded guilty that same year and was sentenced to 18 months of probation.

In 2013, Sayoc was charged with battery and third-degree grand theft, a felony. He pleaded guilty in 2014 and was sentenced to probation. In 2009, Sayoc was charged with operating without a valid license, not having insurance and not having a tag light and was fined after pleading guilty to the misdemeanor charges. In 2014, Sayoc was arrested on a petit theft charge and violation of probation. He was sentenced to 30 days in jail.

This story will be updated as necessary.  Stay tuned.