The Amigos Taqueria Y Tequila on Canal Street in Westerly, Rhode Island allowed its crew to wear t-shirts that said “86 45” on them on Election night. RI State Senator Elaine Morgan believes it’s calling for Trump’s death and she called for a boycott of the establishment. Wendy Carr, the restaurant owner, says  it’s calling for his impeachment and says Morgan should “focus on her policies.” 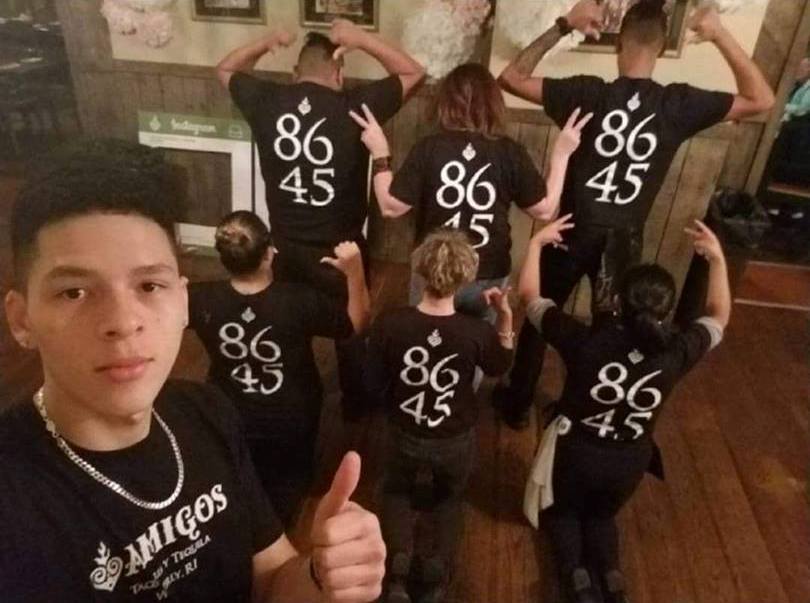 Carr said her staff’s voluntary decision to wear the shirts on Election Night was the culmination of her personal monthslong push to bring attention to the midterm election. “It’s important to look at the shirts within the context of the night. It was a political night, Election Night,” Carr said during an interview.

By promoting the sale of the T-shirts on the restaurant’s Facebook page, Carr said she was “trying to build community based on shared values” and encourage political action. “I was not and would not ever try to make anyone feel unwelcome,” she said.

Carr said she donated proceeds from sales of the T-shirts to national candidates. The Facebook post attracted both supporters and critics, some of whom initially said they would boycott the High Street establishment.

As for “building community”- she’s trying to gather the anti-Trump crowd. And frankly, that would keep most Trump supporters away, particularly with the publicity surrounding the sale of the t-shirts.

So who’s right and what does “86 45 ” mean? The term was said to originate with a restaurant during the 1930s and may have been synonymous with the term “nix.”

This possible origin stems from the Prohibition era at a bar called Chumley’s located at 86 Bedford Street in New York City. To survive, many speakeasies had the police on somewhat of a payroll so that they might be warned of a raid. In the case of Chumley’s, it is said that police would call and tell the bartender to 86 his customers, which meant that 1) a raid was about to happen and 2) that they should all exit via the 86 Bedford door while the police would approach at the entrance on Pamela Court.

Another plausible explanation for the saying is brought you by the U.S. Navy’s Allowance Type (AT) coding system that was used to identify and classify the status of inventory. The code AT-6 was assigned to inventory that was designated for disposal, specifically after World War II as the Navy decommissioned many of its warships and went through the process of cleaning out its storerooms where they kept spare parts. During this process, any parts that were labeled AT-6 were considered trash and thrown out.

The gang style featured photo was passed around social media and garnered anger from Trump supporters. Republican Senator Elaine Morgan was re-elected to a 3rd term on November 6. The restaurant owner questioned “her judgment” in calling for a boycott and claimed she was “trying to incite a lynch mob.”

Senator Morgan’s political opponent in the race, Jennifer Douglas, also slammed the Senator, saying that her remarks about the restaurant were “inappropriate.”

Let’s actually talk about the restaurant being “inappropriate.” The choice for a restaurant to make its progressive/liberal stand public is theirs.