“We have to stop demonizing people and realize the biggest terror threat in this country is white men, most of them radicalized to the right, and we have to start doing something about them.” Don Lemon, CNN

As soon as he said it, the backlash was immediate. And he stands by his comment, even to issuing a pile of so-called “facts” to back himself up. But a response by combat veteran, retired Navy SEAL Ephraim Mattos explains why Lemon’s narrative is stupid and why Americans must vote today. 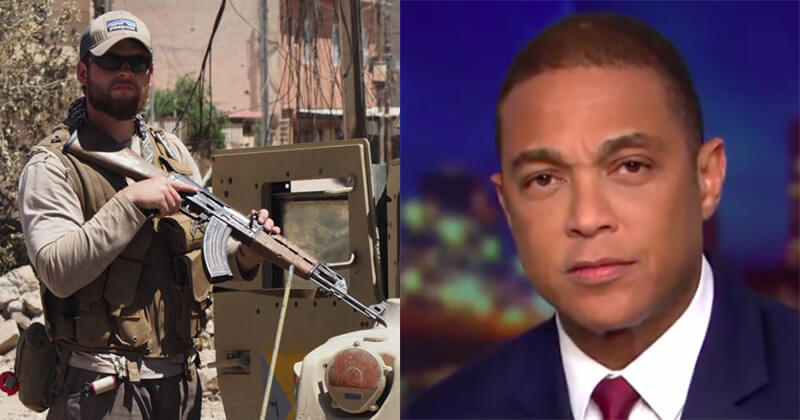 Ephraim Mattos, as a member of Free Burma Rangers after his Navy SEAL Service, he and his teammates have rescued civilians who are caught up in wars not of their own choosing.  He issued a statement that went viral. Here it is in its entirety (emphasis mine):

After surviving three wars, a gunshot wound, a near fatal drowning, a failed parachute, Taliban ambushes, ISIS snipers, mortars, mine-fields, suicide bombers and laying down my life for the cause of freedom while fighting shoulder-to-shoulder with my brother Arabs, Asians, Blacks, Hispanics, Christians, Muslims, Jews, Buddhists, Animists, and Atheists, I have now returned home to the USA where a CNN host has labeled me as a radicalized right wing terrorist simply because of my gender and the color of my skin.

I represent just one of the hundreds of thousands of conservative white men who have fought to preserve freedom in this great Nation and in other nations. My forefathers are the 3% who founded this Republic against the might of the British Army. It was white Conservative men who died by the tens of thousands after charging into our southern states to free our black brothers from the slavery imposed on them by the Liberal left. We were the ones who acknowledged that women have a right to vote. We held the line in WWI and charged the beaches of Normandy in WWII. We have fought for freedom and liberty for generations and we continue to do so today alongside all of our brothers and sisters regardless of their race or religion.

In the early 1930s, Hitler said the same thing about the Jews that Don Lemon of CNN just said about white men. This is the true face of the Democratic Party. First they enslaved and killed blacks, and now they use them to spew hatred and lies against the very people who have fought for generations to free them and uplift them.

Remember that when you go to vote.

One final thought: To make a point, I have referred to myself as a “white male” in the previous sentences multiple times, but I must make it clear that I identify as simply “American,” not as “white” or “male” or “Republican.”

Although blatantly racist and hateful, do not let Don Lemon’s ignorant words drive you into viewing yourself only by your race and religion. Identity politics does not lead to freedom. It only leads to hatred and division and an “us vs. them” mentality.

If CNN does not fire Don Lemon immediately, it only goes to show that they are truly the “enemy of the people.” Ephraim Mattos, combat veteran

Mattos is also co-author of “City of Death, Humanitarian Warriors in the Battle of Mosul.” This video gives a tiny snippet of his background:

Don Lemon needs to leave the United States and head to a more compatible country, like Nigeria or Yemen, for example. As for the rest of us, we’re simply “Americans.”