Twelve people are dead, including the gunman in a Virginia Beach shooting at the Courthouse (Municipal Center.) Six people have been transported to area hospitals, one of those to the regional trauma center. Their conditions are unknown at this time. 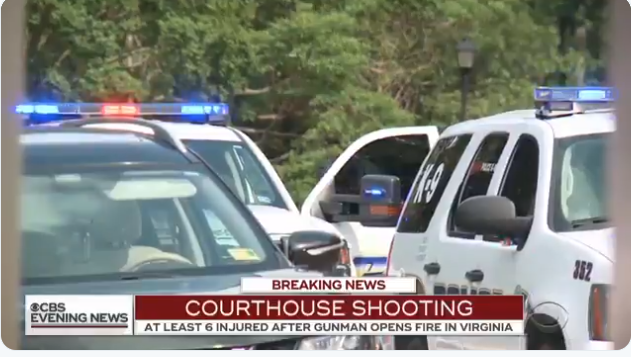 One of the persons injured was a Virginia Beach police officer, who was saved by his vest, according to the police chief.

ACTIVE SHOOTER SITUATION-municipal center, building 2. Multiple injuries. At this time it is believed that only 1 shooter, and they have been taken into custody. More to follow

Information so far is that around 4 p.m. Friday, a current, long time city employee of the public utility department walked into Building #2 of the Virginia Beach Municipal Center and began “indiscriminately shooting” on multiple floors of the building, according to Police Chief Joe Cervera. Eleven people were killed.

DEVELOPING: At least 6 victims were taken to Virginia hospitals Friday after shots were fired at the Virginia Beach municipal center, police say; one person is in custody.

Federal law enforcement is assisting with the investigation.@jeffpeguescbs has the details pic.twitter.com/YnppvVr0wD

A viewer shared this picture of a @VBPD officer with his hand on the shoulder of a man with a bloodied shirt at the Virginia Beach Municipal Center. #hrva pic.twitter.com/8HIki3UJ94

Building 2 near the courthouse went into lockdown as officers entered the building, and ultimately engaged the suspect. A gunfight ensued in which the suspect was killed. Police say that the scene is still “active” which simply means that the investigation has long way to go to find all the answers. They’ve set up a place where family members can meet, and asked that people please avoid the area.

Building #2 houses the operations center, with multiple departments. The suspect’s name has not been released, but police say they will reveal more information at a later time.

#VIRGINIABEACH – 11 people are dead, 6 people injured May 31 when a #shooter, who was shot and killed by #police, opened fire inside the Virginia Beach Municipal Center.. Avoid the area.(Link – https://t.co/uP6PrKK4jj)

DEVELOPING: At least 11 people have been killed in a mass shooting at the Virginia Beach Municipal Center. One person has been taken into custody. Several others have been hospitalized. https://t.co/8eRORKo9Xd

Black Racism, by the Numbers: The TRUTH isn’t racist, it’s just the TRUTH.